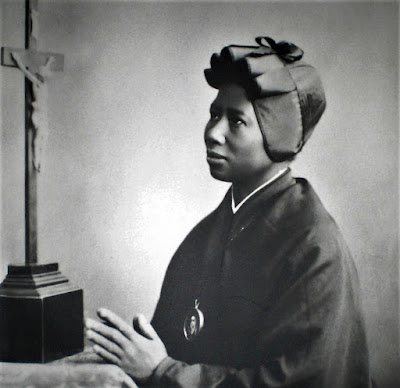 On February 8, the Church commemorates the life of St. Josephine Bakhita, a Canossian Sister who was kidnapped and sold into slavery in Sudan.

Josephine Bakhita was born in 1869, in a small village in the Darfur region of Sudan. She was kidnapped while working in the fields with her family and subsequently sold into slavery. Her captors asked for her name but she was too terrified to remember so they named her “Bakhita,” which means “fortunate” in Arabic.

Retrospectively, Bakhita was very fortunate, but the first years of her life do not necessarily attest to it. She was tortured by her various owners who branded her, beat and cut her. In her biography she notes one particularly terrifying moment when one of her masters cut her 114 times and poured salt in her wounds to ensure that the scars remained. “I felt I was going to die any moment, especially when they rubbed me with the salt,” Bakhita wrote.

She bore her suffering valiantly though she did not know Christ or the redemptive nature of suffering. She also had a certain awe for the world and its creator. “Seeing the sun, the moon and the stars, I said to myself: 'Who could be the Master of these beautiful things?' And I felt a great desire to see Him, to know Him and to pay Him homage.”

After being sold a total of five times, Bakhita was purchased by Callisto Legnani, the Italian consul in Khartoum, the capital of Sudan. Two years later, he took Bakhita to Italy to work as a nanny for his colleague, Augusto Michieli. He, in turn, sent Bakhita to accompany his daughter to a school in Venice run by the Canossian Sisters.

Bakhita felt called to learn more about the Church, and was baptized with the name “Josephine Margaret.” In the meantime, Michieli wanted to take Josephine and his daughter back to Sudan, but Josephine refused to return.

The disagreement escalated and was taken to the Italian courts where it was ruled that Josephine could stay in Italy because she was a free woman. Slavery was not recognized in Italy and it had also been illegal in Sudan since before Josephine had been born.

Josephine remained in Italy and decided to enter the Canossians in 1893. She made her profession in 1896 and was sent to Northern Italy, where she dedicated her life to assisting her community and teaching others to love God.

She was known for her smile, gentleness and holiness. She even went on record saying, “If I were to meet the slave-traders who kidnapped me and even those who tortured me, I would kneel and kiss their hands, for if that did not happen, I would not be a Christian and Religious today.”

St. Josephine was beatified in 1992 and canonized shortly after on October 2000 by Pope John Paul II. She is the first person to be canonized from Sudan and is the patron saint of the country.

O GOD, who didst lead Saint Josephine Bakhita from abject slavery to the dignity of being thy daughter and a bride of Christ: grant, we pray; that by her example we may show constant love for the Lord Jesus crucified, remaining steadfast in charity and prompt to show compassion; through Jesus Christ thy Son our Lord, who liveth and reigneth with thee, in the unity of the Holy Spirit, ever one God, world without end. Amen.