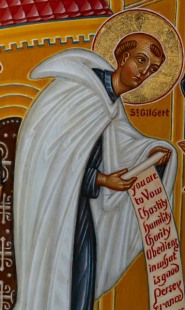 Born in about the year 1083 in Sempringham, England, into a wealthy family, St. Gilbert’s father was a Norman knight who had decided that his son would follow a different path, and so sent him to France to study and to prepare for ordination.

When St. Gilbert returned to England he was not yet ordained a priest. His father had died, and Gilbert inherited several estates. While many might have chosen a life of ease in such circumstances, St. Gilbert chose to live a simple life, putting himself at the service of the poor by sharing with them his considerable resources. He was ordained to the priesthood, and served as the parish priest at Sempringham, where he had grown up.

There were seven young women in the congregation who had expressed to him a desire to live in community as vowed religious. St. Gilbert took their vocation seriously, and had a house built for them near the parish church. Although their communal life was one of simplicity and austerity, the community grew in numbers. They worked on the land, providing for their own needs and for the needs of the poor. It was St. Gilbert’s hope that the Community would be able to become part of the Cistercians, or one of the other established orders, but that never happened. They became known as the Gilbertines, and they remained as their own order, which continued to grow until King Henry VIII ordered the suppression of all monasteries in 1538.

The Gilbertines developed a beautiful custom in their religious houses, of having what was called “the plate of the Lord Jesus.” On this plate they would place the very best portion of their meals, which would then be shared with the poor. This custom was a direct reflection of St. Gilbert’s own love for the poor, and it continued the charity he had always shown.

Although St. Gilbert came from great wealth, and through inheritance he himself was a man of means, nonetheless he lived the simple life of a devoted parish priest. He ate very little food, and spent many nights in prayer. He lived a life of hardship and sacrifice willingly, as a sign of his love for Christ and for the poor. He died in the year 1190 at the age of 106.

O God, by whose grace thy servant St. Gilbert of Sempringham, enkindled with the fire of thy love, became a burning and a shining light in thy Church: Grant that we also may be aflame with the spirit of love and discipline, and may ever walk before thee as children of light; through Jesus Christ our Lord, who with thee, in the unity of the Holy Spirit, liveth and reigneth, one God, now and for ever. Amen.

Posted by Fr. Christopher George Phillips at 10:37 AM