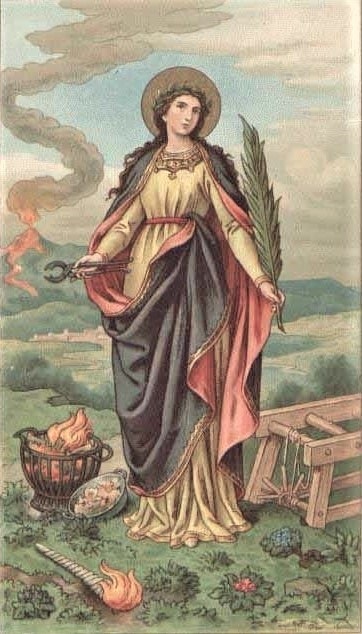 St. Agatha was born in Sicily, and is one of the many brave and faithful martyrs of the 3rd century. Her family was a wealthy and important one. Agatha was raised as a Christian, and when she was a very young girl she dedicated her life to God alone, and felt no vocation to be married. Because of her beauty and wealth, and because of the importance of her family, there were many men who sought to marry her. She resisted them all, desiring only a life of prayer and charitable service.

There was a man named Quintian, a Roman prefect, who thought his rank and power could force Agatha into a relationship with him. Knowing she was a Christian, and because this was in a time of persecution, he had her arrested and brought to trial. The judge was none other than himself. He expected Agatha to give in to him when she was faced with torture and death, but she simply rededicated herself to God.

Quintian imprisoned Agatha, locking her up with cruel and immoral women, in order to get her to change her mind. After she had suffered a month of being assaulted and humiliated she never wavered, saying that although they could physically lock her up, her real freedom came from Jesus. Quintian continued to have her tortured. He refused to allow her to have any medical care, but St. Agatha was given great comfort by God, who allowed her to have a vision of St. Peter, in which he encouraged and strengthened her.

Finally, because of the repeated torture and mutilation of her body, St. Agatha died in about the year 251, while whispering a prayer of thanks to God.

O God, who among the manifold works of thine almighty power hast bestowed even upon the gentleness of women strength to win the victory of martyrdom: grant, we beseech thee; that we, who on this day recall the heavenly birth of Saint Agatha, thy Virgin and Martyr, may so follow in her footsteps, that we may likewise attain unto thee; through Jesus Christ thy Son our Lord, who liveth and reigneth with thee, in the unity of the Holy Spirit, ever one God, world without end. Amen.

Posted by Fr. Christopher George Phillips at 11:25 AM