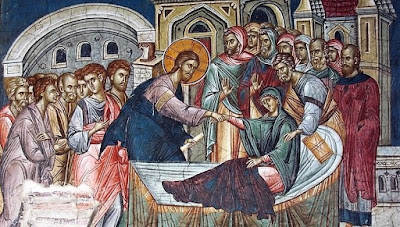 “At that time: Jesus left the synagogue, and entered the house of Simon and Andrew, with James and John. Now Simon's mother-in-law lay sick with a fever, and immediately they told him of her. And he came and took her by the hand and lifted her up, and the fever left her; and she served them. That evening, at sundown, they brought to him all who were sick or possessed with demons. And the whole city was gathered together about the door. And he healed many who were sick with various diseases, and cast out many demons; and he would not permit the demons to speak, because they knew him. And in the morning, a great while before day, he rose and went out to a lonely place, and there he prayed. And Simon and those who were with him pursued him, and they found him and said to him, ‘Every one is searching for you.’ And he said to them, ‘Let us go on to the next towns, that I may preach there also; for that is why I came out.’ And he went throughout all Galilee, preaching in their synagogues and casting out demons.”


Just before the events recounted in this section of St. Mark’s Gospel Jesus had been in the synagogue where He had spoken to the people and where He had cast out the evil spirit from the man who was suffering. When the synagogue service ended He went a short distance away to the house of Simon Peter. Peter’s wife’s mother was there, very sick with fever, and our Lord healed her of this sickness.

These things our Lord had said and done couldn’t be concealed. The manifestation of such great power and authority wasn’t something that could be kept secret, and so that evening there were crowds gathering outside Simon Peter’s house, people wanting to experience Christ’s healing touch. And as they came, so Jesus healed.

Within a few verses of St. Mark's Gospel we hear of Jesus healing on three different occasions and in three different circumstances. First, He healed in the synagogue; second, He healed in the house of Simon Peter; third, He healed outside in the street. The people were flocking to Jesus because they recognized in Him one who could actually do things. There were plenty of religious leaders who could talk and expound and lecture and preach; but here was One who dealt not only in words but also with action.

All too often we approach God like that. For every time we remember to thank God, there are hundreds of times we are asking Him for something. We should not come to God only in bad times, when things are in a mess, or when some tragedy happens. Certainly, God is concerned for us then - but we need to have gratitude and love for God, too. God isn’t someone to be used only in difficult times, but He is someone to be loved and worshipped and obeyed every day and in all circumstances.
Posted by Fr. Christopher George Phillips at 10:36 AM