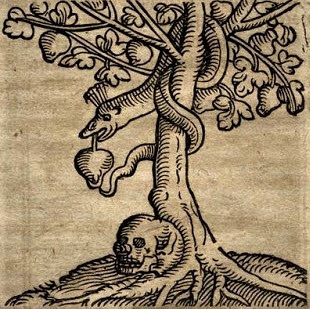 Temptation, in and of itself, isn’t sinful. Christ was tempted in every way as we are, yet He was without sin. But there’s something else we should understand about temptation. Temptation is not so much a matter of choosing between good and evil; rather, we should understand it as being two opposite ways of experiencing the gifts of God. Something is “good” when it’s used according to the will of the God. Something is “evil” when it’s used against the will of God, and against God Himself.

So then, to be tempted is to be presented with circumstances in which we choose to misuse our gifts, so we end up being someone whom we’re not supposed to be in our relationship with God. Adam and Eve were tempted not to be the image of God. Satan tried to tempt Jesus not to be the Son of God. In our own temptations, we’re tempted to be something we’re not; namely, the devil tries to get us not to be the sons and daughters of God.

Temptation began in the Garden of Eden, the place God had made for the happiness and fulfillment of mankind. In the center of that garden were two trees, and these two trees defined the relationship between God and man. There was the tree of life, and there was the tree of the knowledge of good and evil. The central place in all that was God's place. Man's life is supposed to revolve around God, with God in the center. This means that life, knowledge, and death are God's to give. They’re not something that man can reach out and grab for himself. Man received his life and his knowledge as a gift from God, Who is in the center of it all. Man was made from the dust of the ground by the hand of God, and he had God's breath of life breathed into his nostrils. Man was alive with the life of God, and when he was created he knew only good, because he was created in the “image of God,” Who is the supreme Good.

In the center of the garden God had erected a boundary – a line which declared that there’s a difference between God and the image of God. There’s a difference between the Creator and His foremost creature, Man. Now, God had shown great care in this creation. Man had everything he needed for life as God intended it. Every tree in the garden was given to man for food to preserve his life - every tree, that is, except the tree of knowing good and evil. This was the only limit on man's freedom. He was free to eat of any tree in the garden except one. That was the boundary, and over that boundary man was not allowed to venture or he would die. For man to reach his hand over that line to take and eat the forbidden food, was to reach into the center - the place that only God may occupy. It was an attempt to usurp God's place. It was to try and be a kind of god in place of the one true God. It was to try and push God out from the center of life, to grab for something that wasn’t given to man. And to reach into that place reserved for God meant death, because only God can be God.

This is our temptation. We’re tempted to trespass the boundaries established by God, and to exercise a freedom without any limit whatsoever. We try to push God from the center and put ourselves there, to draw life and knowledge from ourselves and our experiences, rather than from God - to live as if God doesn’t matter and as if we mattered most. To try and live without God in the center is nothing other than death disguised as life. So then, what it comes down to is this: temptation is really a matter of life and death, not good and evil.

The temptation of Christ was an assault by Satan on Christ the Incarnate Word of God. And when we look at the first temptation, back in Genesis, it began with an assault on the very words of God. “Did God really say that you must not eat from any tree in the garden?” the serpent asked. That’s the question which formed the basis of Man’s first temptation – to call into question the word of God. Satan was luring Eve into stepping back and to become a critic of God’s word, rather than simply being the one to whom God was speaking. She was being invited to speculate about God, to judge God and His word, to draw conclusions about God apart from His word, to use her own subjective thought about God against God’s word. And what was Satan trying to make happen? Basically, if Eve’s experience conflicted with God’s word, then maybe God’s word was wrong, or she must have misunderstood it.

It’s a subtle temptation that Satan put before Eve, when he made her question what God had said. It’s a question that drives a wedge between God and Man. That’s what temptation is: the attempt to separate us from the God who loves us. And it’s something we’ve heard throughout history. “Don’t worry about the Ten Commandments – they’re the product of old-fashioned thinking and times gone by.” The temptation is to think that maybe God’s eternal law doesn't apply to our modern, enlightened situation, so making everything subjective. “Do I really have to listen to my parents if I disagree with them?” “Is it really murder if I feel that I just can’t cope with another child?” These are the sorts of questions we hear today. And when it comes to religion, it's a matter of questioning whether God really said, "This is my body; this is my blood" or did He mean something else? Did God really say to His apostles and their successors, "The sins you forgive are forgiven?" Did God really say, "Whoever believes and is baptized will be saved?" Did God really say that He forgives sin unconditionally, that Christ has died and been raised for us?

Satan is always trying to open a little crack, a tiny separation between God and man. And as we know very well, a serpent can slip into the smallest of openings. Satan, always the serpent, tries to force a little opening, because if he can just get his head in, and the rest of him will follow soon enough.

Adam and Eve decided to take charge of their own lives. And in taking charge, they lost control. Adam fell, and in Adam all mankind fell. Man reaches out to be "like God" and what he gets is death; but God reaches out to us in Christ, and He gives us life.

So much does God reach out to us, that Jesus was even led by the Spirit into the wilderness to be tempted by the devil – but this means that Christ, in human flesh, has triumphed over temptation. And because we are baptized into Christ, His victory is our victory.

Temptations will come, but Adam in us must die and Christ in us must rise. Our comfort and strength in every temptation is that Christ has already triumphed over temptation in our place.

The cross of Christ is our tree of life, and it must be planted in the center of our life, because it is through Christ and His cross that we have eternal life.
Posted by Fr. Christopher George Phillips at 11:32 AM