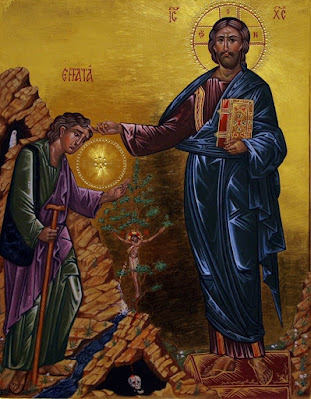 At that time: Jesus returned from the region of Tyre, and went through Sidon to the Sea of Galilee, through the region of the Decapolis. And they brought to him a man who was deaf and had an impediment in his speech; and they begged him to lay his hand upon him. And taking him aside from the multitude privately, he put his fingers into his ears, and he spat and touched his tongue; and looking up to heaven, he sighed, and said to him, "Ephphatha," that is, "Be opened." And his ears were opened, his tongue was released, and he spoke plainly. And he charged them to tell no one; but the more he charged them, the more zealously they proclaimed it. And they were astonished beyond measure, saying, "He has done all things well; he even makes the deaf hear and the mute speak."


After Jesus spent time in the Gentile country of Tyre and Sidon where he dealt with the Syro-Phoenecian woman who was pleading for the needs of her little daughter, He left that area and returned to the area around the Sea of Galilee, through the region of the Decapolis. This is a word which means “Ten Cities” and describes a group of cities which were a mixture of Greek and Roman cultures (so still Gentile) but still very much in the midst of the Jewish people, and there was some crossing back and forth in their cultures. Ministering in this area was one of the ways our Lord emphasized that He had come “for all mankind” – not just for one people, not just for one culture, but to bring the Gospel and the Kingdom of God to everyone. This time away from Galilee was about eight months altogether – an extended period of time away from the Pharisees and those who were always attacking Jesus, and so giving Him time to be with His apostles and to teach them without interruption.

When Jesus did arrive back in the region of Galilee, He came into the district of the Decapolis, and it was there that a man was brought to Him who was deaf and who had an impediment in his speech – obviously, two things that went together, since so often deafness results in difficult speech, because the deaf person cannot hear himself. We see in this miracle an example of the very beautiful and personal way in which Jesus treated people.

He took the man aside from the crowd, all by himself. This was an act of great kindness and consideration. Deafness can be difficult and sometimes embarrassing, when a person is being spoken to, and yet cannot understand.  So we see Jesus having a regard for what was a difficult situation for this man. And then the gospel describes how our Lord brought about the cure. It’s as though what Jesus did in performing the cure included a kind of “acting it out” so that the man could understand. He put his hands in the man’s ears, showing that He was going to heal his deafness. He touched his tongue, showing that He was going to deal with the speech impediment, too. Jesus then looked up to heaven to show that it was from God that the healing was coming. After all that, Jesus then spoke the word, and the man was healed.

One of the things that is evident in this is the great dignity which our Lord showed to this individual. The man had a special need and a special problem, and it was with tenderness and consideration that Jesus dealt with him, always in a way that considered the man’s feelings and also in a way that he could understand.  That’s the way Jesus deals with each one of us. He knows us personally, and looks after our needs personally.

When the miracle was completed, the people said, “He has done all things well…”  That reminds us of God’s statement when He had completed creation – “he saw that all things were good.” When Jesus came, bringing healing and salvation, in a sense He was engaged in the work of creation all over again. In the beginning everything had been good; however, man’s sin had spoiled it. Jesus brings back God's beauty to the world which sin had made ugly.  Now all things are being restored in Christ.
Posted by Fr. Christopher George Phillips at 10:01 AM