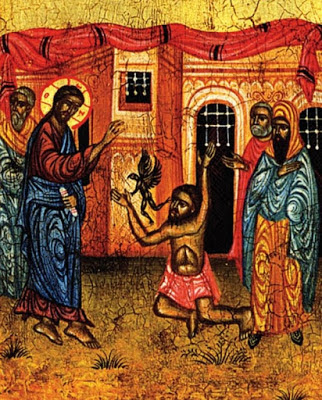 In Capernaum on the Sabbath, Jesus entered the synagogue and taught. And they were astonished at his teaching, for he taught them as one who had authority, and not as the scribes. And immediately there was in their synagogue a man with an unclean spirit; and he cried out, "What have you to do with us, Jesus of Nazareth? Have you come to destroy us? I know who you are, the Holy One of God." But Jesus rebuked him, saying, "Be silent, and come out of him!" And the unclean spirit, convulsing him and crying with a loud voice, came out of him. And they were all amazed, so that they questioned among themselves, saying, "What is this? A new teaching! With authority he commands even the unclean spirits, and they obey him." And at once his fame spread everywhere throughout all the surrounding region of Galilee.


Our Lord’s earthly ministry was inaugurated at His baptism. He was then tested by the devil in the wilderness. He announced the purpose of His ministry with the proclamation of the coming of the Kingdom of God. He gathered His initial circle of followers, the apostles, to assist Him in carrying out His work. And now, He begins in earnest.

St. Mark makes note of the fact that the people were “astonished at His teaching, for He taught them as one who had authority, and not as the scribes.”

So then, how did Jesus’ teaching differ so much from the teaching of the scribes? Primarily it was because He taught with His own personal authority. This was vastly different from the technique of the scribes. No scribe ever gave a decision on his own. He would always begin with a phrase like, “There is a teaching that says thus and so...” and he would then quote all his various authorities. But when our Lord spoke, He needed no authority beyond Himself. He spoke with absolute independence; He cited no authorities; He quoted no experts. To those who heard Him, it was like a fresh breeze blowing in and they were truly “astonished” at His teaching. And no wonder, since they were hearing the very voice of God Himself!

If our Lord’s words had astonished the people in the synagogue, then what He did next left them absolutely thunderstruck! In the synagogue there was a man who was possessed by an “unclean spirit.” All through the gospels we come across people who had unclean spirits, who were possessed by demons or devils. This was a manifestation of evil – a manifestation of the work of Satan, that fallen “angel of light” who “goes about like a roaring lion, seeking to devour whom he will...” Unfortunately, our world today feels that it’s too “sophisticated” to believe in such things, and this is just what Satan loves. He is never more successful than when he can get us to deny his existence because then he can have free reign.

Our Lord knew this, of course. That’s why we see Him exercise His divine power over this power of evil in men’s lives. It’s a reminder to us that God is always stronger than Satan. And as Jesus showed the power He had over these malevolent forces, so He became better and better known, and the power of God was manifested.
Posted by Fr. Christopher George Phillips at 10:10 AM