The Third Sunday after Epiphany 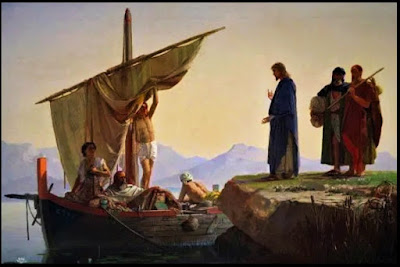 After John was arrested, Jesus came into Galilee, preaching the gospel of God, and saying, “The time is fulfilled, and the kingdom of God is at hand; repent, and believe in the gospel.” And passing along by the Sea of Galilee, he saw Simon and Andrew the brother of Simon casting a net in the sea; for they were fishermen. And Jesus said to them, “Follow me and I will make you become fishers of men.” And immediately they left their nets and followed him. And going on a little farther, he saw James the son of Zebedee and John his brother, who were in their boat mending the nets. And immediately he called them; and they left their father Zebedee in the boat with the hired servants, and followed him.


When Jesus began to preach He said, “The time is fulfilled, and the kingdom of God is at hand.”

This idea of the Kingdom is deeply rooted in the Old Testament, and it’s a central theme in the teaching of Jesus Christ; namely, that there is the “kingly rule,” the “sovereignty” of God, and that all things are to be made subject to this rule.

Now of course, the kingdom being proclaimed by Christ isn’t confined only to this world – it continues into eternity – but it begins here, and this portion of the Gospel shows us Jesus laying the foundation for the Kingdom with the calling of His first apostles. They were fishermen – simple men, ordinary men – called by our Lord while they were engaged in doing their day’s work.

And how did He call them? All He said was, “Follow me.” He didn’t outline any great theological system for them, or lay out a line of reasoning trying to convince them. He just said, “Follow me.” And they did. With that invitation He called them to a specific service. “I will make you fishers of men...”
Of course, they couldn’t have known it then, but Jesus was calling them to a life which wasn’t going to be easy. They were being called to a life in which they would expend all their energy, and they were being called to a Faith for which they ultimately would give their lives.

There was no other assurance that He gave them. He didn’t outline the future for them. He didn’t give any guarantees. He simply invited them to put themselves under the sovereign rule of God, to move into the kingdom which He had come to establish, and in that kingdom they would find their fulfillment and true purpose. They were being invited to put aside all their other interests and activities – all the other things they thought were important – and they would be required to do only one thing: to follow Christ.

In fact, the invitation He extended to them, He continues to extend down to our own day, to us. This invitation to place our lives under the rule of God is an open invitation to every one of us.

To live in God’s Kingdom means to follow Christ more closely. It often calls for a radical change in direction, and it always involves entrusting ourselves to God, realizing that God’s plan for us might not coincide with our own best-laid plans.