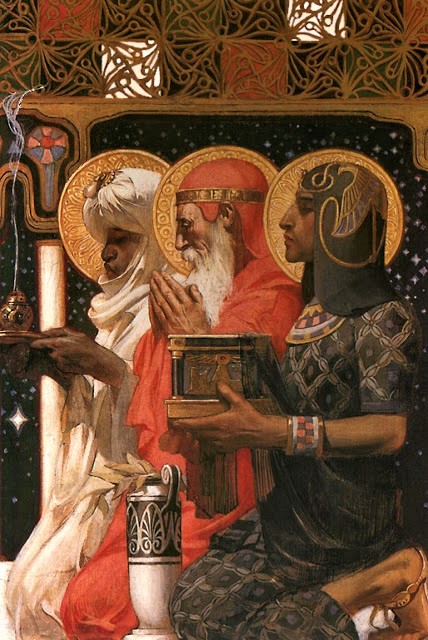 Who were the Magi? They were the first Gentiles to believe in Christ, and were guided by a mysterious star which led them from the East to the village of Bethlehem, where they found the Infant Jesus.

They are called "sages" or "wise men" in the New Testament, but the idea that they were kings first appears in Christian tradition in the writings of Tertullian, who called them "fere regis," or "almost kings." This became generally accepted by the sixth century, because of the implication of Psalm 72, which speaks of the kings of Tarshish, Arabia, and Saba, "who shall bring presents." The New Testament says nothing of how many there were, although the traditional number of three was first ascribed by Origen, based upon the gifts of gold, frankincense, and myrrh. Their names (Gaspar, Melchior, and Balthasar) are first mentioned in the sixth century, and are also included in the writings of the Venerable Bede. In the Middle Ages the Magi were venerated as saints, and there are relics enshrined in the cathedral in Cologne.

But what do the Magi teach us? Surely, the overwhelming lesson is the absolute importance of complete and utter adoration. These three had traveled great distances and risked both physical danger and the wrath of Herod himself just to kneel before the Incarnate Word of God. All we need to do is to go to the nearest Catholic Church, where the same Christ waits for us in the tabernacle. O come, let us adore Him: Christ the Lord!