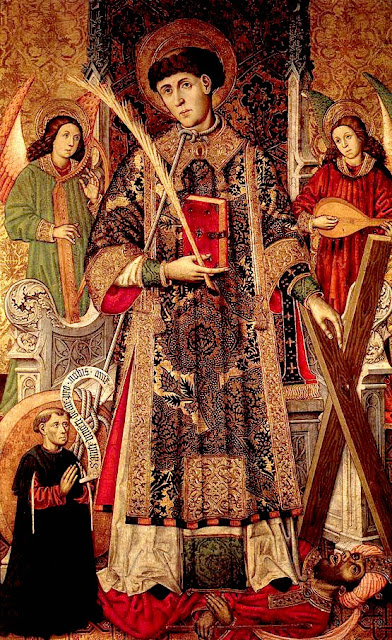 St. Vincent of Saragossa was one of the Church's three most illustrious deacons, the other two being Stephen and Lawrence. He is also Spain's most renowned martyr. Ordained deacon by Bishop Valerius of Saragossa, he was taken in chains to Valencia during the Diocletian persecution and put to death. From legend we have the following details of his martyrdom. After brutal scourging in the presence of many witnesses, he was stretched on the rack; but neither torture nor blandishments nor threats could undermine the strength and courage of his faith. Next, he was cast on a heated grating, lacerated with iron hooks, and seared with hot metal plates. Then he was returned to prison, where the floor was heavily strewn with pieces of broken glass. A heavenly brightness flooded the entire dungeon, filling all who saw it with greatest awe.

After this he was placed on a soft bed in the hope that lenient treatment would induce apostasy, since torture had proven ineffective. But strengthened by faith in Christ Jesus and the hope of everlasting life, Vincent maintained an invincible spirit and overcame all efforts, whether by fire, sword, rack, or torture to induce defection. He persevered to the end and gained the heavenly crown of martyrdom.

- from The Church's Year of Grace, by Pius Parsch

Almighty God, by whose grace and power thy holy Deacon and Martyr Vincent triumphed over suffering and despised death: grant, we beseech thee, by his intercession; that enduring hardness, and waxing valiant in fight, we may with the noble army of Martyrs receive the crown of everlasting life; through Jesus Christ thy Son our Lord, who liveth and reigneth with thee, in the unity of the Holy Spirit, ever one God, world without end. Amen.

Posted by Fr. Christopher George Phillips at 10:31 AM