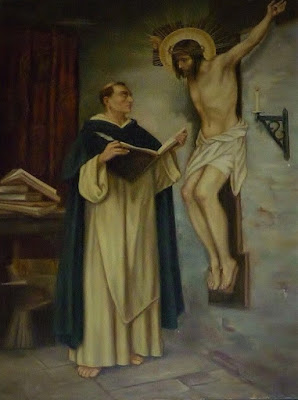 One of the greatest Catholic teachers in the history of the Church, St. Thomas Aquinas is honoured with the titles Doctor of the Church and Angelic Doctor.

His parents had plans for him. In the year 1230, when he was only five years old, they took him to the Benedictine monastery at Monte Cassino, and it was their hope that he would choose to become a Benedictine there, and eventually become abbot. In 1239 he was sent to Naples to complete his studies. It was there that he was first attracted to philosophy of Aristotle, and he saw how that philosophy could be used in the service of Catholic theology.

Thomas abandoned his family's plans for him and he joined the Dominicans, much to his mother's dismay. In fact, she ordered one of her other sons to capture Thomas away from the Dominicans, and he was kept at home for over a year. Of course, that couldn’t last forever, and once he was free, he went to Paris and then to Cologne, where he finished his studies with St. Albert the Great. He eventually became a professor at the University of Paris, and was known throughout the Church as one of the great scholars of all time.

But along with his fame as a scholar, he remained modest, a perfect model of childlike simplicity and goodness. He was known for his mildness in speaking and for his great kindness. Whatever clothing or other items he could give away, he gladly did. He kept nothing superfluous in his efforts to alleviate the needs of others.

His great Summa – which was his last and, unfortunately, uncompleted work, is a compendium of the whole of Catholic theology. He stopped work on it after celebrating Mass on December 6, 1273. When asked why he stopped writing, he replied, "I cannot go on.... All that I have written seems to me like so much straw compared to what I have seen and what has been revealed to me." He died just a few months later.

Everlasting God, who didst enrich thy Church with the learning and holiness of thy servant Saint Thomas Aquinas: grant to all who seek thee a humble mind and a pure heart; that they may know thy Son Jesus Christ to be the way, the truth and the life; who liveth and reigneth with thee, in the unity of the Holy Spirit, ever one God, world without end. Amen.

Posted by Fr. Christopher George Phillips at 10:04 AM