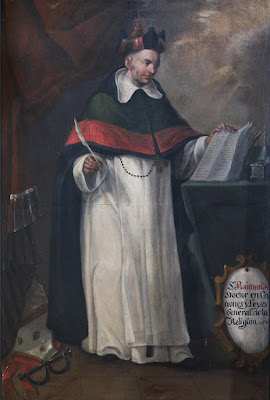 St. Raymond of Peñafort lived to be a hundred years old, and with such a long life, he had the opportunity to do many things.  He certainly took full advantage of all the time God gave him on this earth. St. Raymond was born into a Spanish family of noblemen, which meant that he had the resources and the education to get a very good start in life.

By the time he was twenty, St. Raymond was teaching philosophy. By the time he was little more than thirty years old he had earned a doctorate in both canon law and civil law. When he was forty-one he entered the Dominican order. Pope Gregory IX called him to Rome to work for him and to be his confessor. One of the things the pope asked him to do was to gather together all the decrees of popes and councils. St. Raymond compiled five books called the Decretals, and this was really the beginning of an organized system of canon law for the Church. In fact, since St. Raymond’s work, there was no other actual Code of Canon Law organized until 1917.

St. Raymond wrote a book for confessors which was a collection of various situations and sins, and in this book he discussed the different doctrines and laws of the Church which would be applied in the various cases – a work which was very helpful to confessors.

At the age of sixty, St. Raymond was appointed archbishop of Tarragona, the capital of Aragon. It was a position which he found to be very difficult.  It caused him to become sick and after two years he resigned.

The peace he felt from that resignation was soon over, however, because when he was sixty-three he was elected by his fellow Dominicans to be the head of the whole Order, the successor of St. Dominic. St. Raymond worked hard, visited on foot all the Dominican houses, reorganized their constitutions, and managed to put through a provision that a master general be allowed to resign. When the new constitutions were accepted, St. Raymond, then sixty-five, resigned as the head of the Dominicans. He still had thirty-five years ahead of him, and he spent those years very productively, opposing heresies and working for the conversion of the Muslims who were occupying Spain.

The most famous miracle associated with him was when St. Raymond accompanied the King of Aragon on an expedition to Majorca. While they were there the saint rebuked the king for giving public scandal. However, finding that his rebuke had no effect on the king, Raymond prepared to return to Barcelona. The king attempted to keep St. Raymond on the island by force, but the saint put his mantle into the sea.  With his staff serving as a mast, and he sailed on his mantle, like a boat, the nearly one hundred miles back to the mainland. On reaching Barcelona, St. Raymond took up his mantle, which was perfectly dry, and was transported through the locked doors of the convent and beyond the astonished crowd that had witnessed his landing. Touched by the miracle, the King of Aragon renounced his evil ways and forevermore led a good life.

O God, who didst appoint blessed Raymond excellently to minister the Sacrament of Penance, and didst wondrously make for him a passage upon the waves of the sea: grant, we pray thee; that, at his intercession, we may bring forth fruits worthy of repentance, and be found meet to attain to the harbour of everlasting salvation; through Jesus Christ thy Son our Lord, who liveth and reigneth with thee, in the unity of the Holy Spirit, ever one God, world without end. Amen.

Posted by Fr. Christopher George Phillips at 11:47 AM