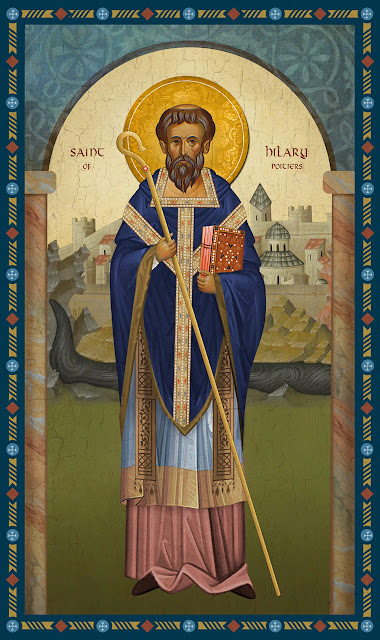 In the early years of the Church it was constantly persecuted by outside forces – sometimes by groups of Jews, frequently by the civil government – and that persecution continued until the conversion of the Emperor Constantine in the year 312. But scarcely had the days of bloody persecution ended, when there arose up within the Church a most dangerous enemy of another sort, Arianism. The heresy of Arianism denied the divinity of Christ; it was, in fact, hardly more than a form of paganism masquerading as the Christian Gospel. The smoldering strife soon flared into a mighty conflict endangering the whole Church; and its spread was all the more rapid and powerful because emperors, who called themselves Christian, proved its best supporters. Once again countless martyrs sealed in blood their belief in Christ's divinity; and orthodox bishops who voiced opposition were forced into exile amid extreme privations.

Among the foremost defenders of the true faith stood Hilary. He belonged to a distinguished family and had received an excellent education. Though a married man, he was made bishop of Poitiers by reason of his exemplary life. It was not long before his valiant defense of the faith precipitated his exile to Phrygia. Here he composed his great work on the Blessed Trinity (in twelve books). It is a vigorous defense of the faith, which, he said, "triumphs when attacked." Finally, after four years he was permitted to return to his native land. He continued his efforts, and through prudence and mildness succeeded in ridding Gaul of Arianism. Because of his edifying and illustrious writings on behalf of the true religion, the Church honors him as one of her doctors.

He wrote to his fellow bishops, “Be ready for martyrdom! Satan himself is clothed as an angel of light.” A favourite motto of St. Hilary was, "Servants of the truth ought to speak the truth."  [adapted from CatholicCulture.org]

Almighty, everlasting God, whose servant Hilary steadfastly confessed thy Son our Saviour Jesus Christ to be very God and very Man: grant that we may hold to this faith, and evermore magnify his holy Name; through the same Jesus Christ thy Son our Lord, who liveth and reigneth with thee, in the unity of the Holy Spirit, ever one God, world without end. Amen.

Posted by Fr. Christopher George Phillips at 11:43 AM