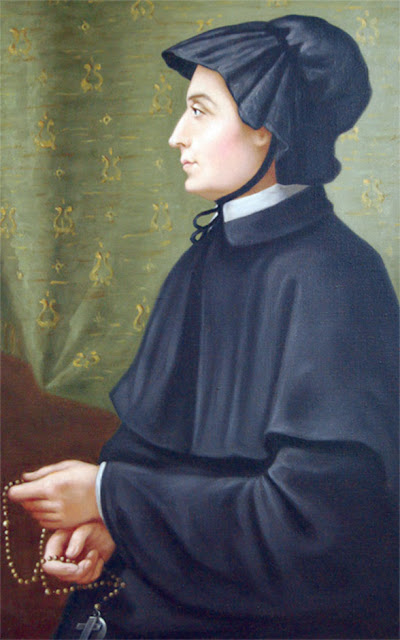 Pope St. Paul VI, when he preached at the canonization of St. Elizabeth Ann Seton, spoke these words: "She is a saint!... Rejoice for your glorious daughter." Born in 1774, just as our nation was stirring in preparation for its own birth, little would indicate that some two hundred years later this delicate infant, born in wealth and raised in the society of the established elite, would be raised to the honor of the altar by the Vicar of Christ on the site of the martyrdom of St. Peter.

"Elizabeth Ann Bayley Seton is a Saint! She is the first daughter of the United States of America to be glorified with this incomparable attribute!" The Pope spoke with unexpected emotion and excitement, so remarkable was the revelation that a woman who should have remained anonymous and safe within the fold of her respectable family, had embarked upon the spiritual journey for truth which she knew could lead only to one unfashionable destination: the Catholic Church.

The Holy Father took care to remind the world that the religious sensibility, the spiritual goodness of the saint, was planted and nurtured in Anglicanism. "We willingly recognize this merit, and, knowing well how much it cost Elizabeth to pass over to the Catholic Church, we admire her courage for adhering to the religious truth and divine reality which were manifested to her therein," the Pope said.

The young widow could have remained in her Trinity Church pew, gazing out the window toward St. Peter's Church on Barclay Street. Everything and everyone around her should have caused hesitation, but her heart had gone before, because the Divine Heart was waiting for her there. As another great convert would later say, "Cor ad cor loquitur."

O God, who didst crown with the gift of true faith Saint Elizabeth Ann Seton’s burning zeal to find thee: grant by her intercession and example; that we may always seek thee with diligent love and find thee in daily service with sincere faith; through Jesus Christ thy Son our Lord, who liveth and reigneth with thee, in the unity of the Holy Spirit, ever one God, world without end. Amen.

A brief biography, from various sources:

Elizabeth Ann Bayley Seton was a true daughter of the American Revolution. She was born in 1774, just two years before the Declaration of Independence. By birth and through her marriage, she was part the most prominent and wealthy families of New York. She was raised as an Episcopalian by her mother and stepmother, and through her religion, she learned the value of prayer, Scripture and a nightly examination of conscience.

Her mother died in when St. Elizabeth was not quite four years old, and her baby sister died that next year. Losing these people who were so important to her gave Elizabeth an understanding that life in this world is temporary, and she knew that it was important to accomplish as much as possible every day. She developed a sense of hope, and she made the effort to face everything with cheerfulness.

When she was 19, Elizabeth was the one of the most beautiful and wealthiest young women in all of New York. She married a handsome, successful businessman, William Seton. They had five children and were very happy. However, their fortunes changed -- his business failed, and eventually he died of tuberculosis. At the young age of 30, Elizabeth was widowed, she had no money left, and she had five small children to support.

She and her husband had traveled to Italy when he was very sick, hoping that he would get better in that warmer climate. That wasn’t to be, and as her husband was dying, Elizabeth witnessed the Catholic faith in action through family friends. Three basic points led her to become a Catholic: belief in the Real Presence, devotion to the Blessed Mother and conviction that the Catholic Church led back to the apostles and to Christ. She herself decided to enter the Catholic Church in 1805, and when she did that, most of her family and friends never spoke to her again.

In order to support her children, Elizabeth opened a school in Baltimore. From the beginning, she and her teachers followed the pattern of a religious community, and it was formally founded as the Sisters of Charity in 1809.

We have more than a thousand letters written by Mother Seton, and they reveal the development of her spiritual life from ordinary goodness to heroic sanctity. She suffered great trials of sickness, misunderstanding, the death of loved ones (her husband and two young daughters) and the heartache of a wayward son. She died January 4, 1821, and became the first American-born citizen to be beatified (1963) and then canonized (1975). She is buried in Emmitsburg, Maryland.

Elizabeth Seton had no extraordinary gifts. She was not a mystic or stigmatic. She did not prophesy or speak in tongues. She had two great devotions: abandonment to the will of God and an ardent love for the Blessed Sacrament.