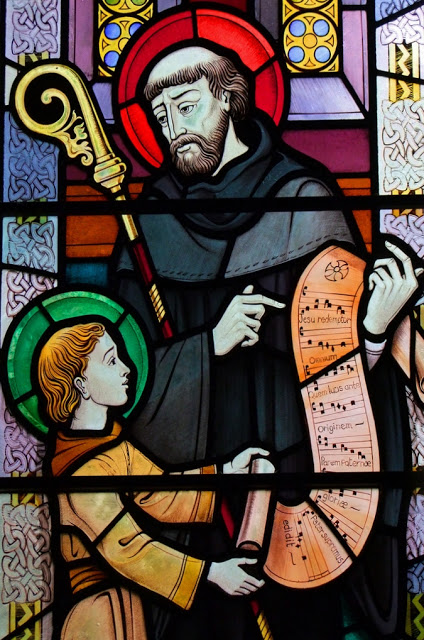 St. Benedict Biscop is not the best known saint, by any means. He didn’t suffer for his faith. He lived fairly comfortably when compared to his contemporaries. But he had a sense of destiny, not just for himself, but for his people. He was (as hagiographers are so fond of saying) “of noble birth." He served his king and he was rewarded with his own land grant. His was the typical “local lad makes good” story.

It could have stopped there. A young man, a property owner, a good Catholic boy, who might have settled down and married the maiden next door, have a passel of children, pass into old age and a quiet death, unknown except to those closest to him. And that would have been fine, if God hadn’t had other plans for him.

Benedict Biscop wanted to travel. He wanted to go to Rome. There was a deep desire within him to make his own kind of ad limina. Saints had lived there, and they had died there, and he wanted to see it, experience it, soak it in for himself. He wanted to pray at the tombs of St. Peter and St. Paul. He wanted to take in the beauty of it all. And he did, not only once, but several times. In fact, much of his life was spent traveling back and forth to Rome, and what he saw there he wanted to carry back to his own people. And that he did too. Art, liturgy, theology, music, everything he experienced in that great city of faith was something he knew would benefit his people in cold, far-away Northumbria.

Here’s part of the spiritual genius of St. Benedict Biscop. Great music, great art, great architecture isn’t just for the great centers of civilization. God intends it for us all. He has created us with a hunger for such things. The good abbot built the first stone structure his people had ever seen. He brought the finest continental glaziers to wild Northumbria to give his monastery unheard-of glass windows. He filled the place with paintings which served as poor men’s books. He established the expectation of learning amongst his monks, astonishing even them with what they could accomplish. His work reached even a young boy named Bede who came and never left.

When it comes to fitting out God’s house, and the worship offered within it, it takes godly imagination, obedience to Catholic tradition, a readiness to reach higher than one thought possible, a desire to do all things well for God. It was done by Benedict Biscop then, and we can do it now.

O God, by whose gift the blessed Abbot Benedict left all things that he might be made perfect: grant unto all those who have entered upon the path of evangelical perfection; that they may neither look back nor linger in the way; but hastening to thee without stumbling, may lay hold on life eternal; through Jesus Christ thy Son our Lord, who liveth and reigneth with thee, in the unity of the Holy Spirit, ever one God, world without end. Amen.

Posted by Fr. Christopher George Phillips at 10:07 AM