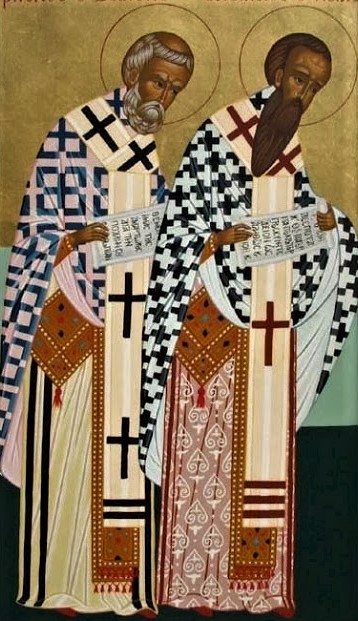 St. Basil was educated in Caesarea, Constantinople, and Athens in the fourth century. He enjoyed stimulating university life. There he met St. Gregory Nazianzen, a quiet, scholarly man. The two became close friends.

Basil traveled through the East and studied monastic life. As a result, he formed his own monastic group. Gregory joined him. From their discussions, Basil composed a rule of life for monks. He allowed monks and nuns to operate hospitals and guesthouses and work outside the community. His principles still influence Eastern monasticism.

The two friends lived the monastic life for only about five years. Then Gregory had to return home to care for his father, who was a bishop. When Gregory got home, he was ordained a priest, although he did not think himself worthy. He watched over his father’s diocese.

In 374, Basil was made bishop of Caesarea. The Church called on him to refute the Arian heresy, which claimed that Jesus was not God. Emperor Valens promoted the heresy. Basil believed the Church must remain independent of the emperor and boldly defended the Church. He preached morning and evening to large crowds. When a famine struck, he gave his money to people who were poor. He organized a place to feed the hungry and served the people himself. Basil even built a town, which included a church, a hospital, and a guesthouse.

Basil continued to write for the Church and to clarify the doctrines of the Trinity and the Incarnation. When one town was falling away from the faith, Basil ordained Gregory to be a bishop and sent him there. Gregory went unhappily because he disliked conflict. The two friends were later reconciled.

For 30 years, Constantinople had been under the leadership of supporters of the Arian movement. The bishops of the surrounding areas begged Gregory to come and restore the faith, and again he went, dreading the task. Gregory made his house a church and preached on the Trinity. The people called him “the theologian.”

Both St. Basil and St. Gregory were misunderstood, but in spite of this, they rebuilt the faith. Basil died at age 49. Gregory resigned from Constantinople because of opposition and spent his last years reading, writing his autobiography, and enjoying his gardens.

Almighty God, whose servants Basil and Gregory proclaimed the mystery of thy Word made flesh, that thy Church might be built up in wisdom and strength: grant that we, through their prayers, and rejoicing in the Lord’s presence among us, may with them be brought to know the power of thine unending love; through the same Jesus Christ thy Son our Lord, who liveth and reigneth with thee, in the unity of the Holy Spirit, ever one God, world without end. Amen.