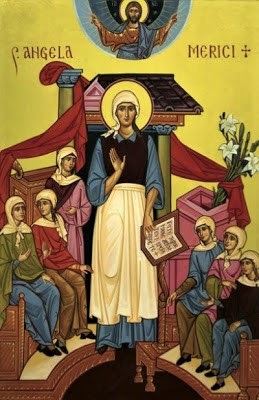 St. Angela Merici was born in 1474 in Verona (in what is now Italy), and she founded the first teaching congregation of women in the Church, the community dedicated to St. Ursula, known as the Ursulines.

As a young woman she became a member of the Third Order of St. Francis, and lived a very simple life – in fact, a life that was so austere, that she wanted to live like St. Francis of Assisi. She wanted to own nothing of her own, so that she wouldn’t become attached to anything. Early in her life she was very concerned about the ignorance about the Faith among poorer children, whose parents could not or would not teach them even their basic catechism. She set out to provide simple lessons for those children who needed to be formed in their understanding of God, and also of basic things like reading.

St. Angela was a very attractive person – not only in the way she presented herself, but also through her very sweet personality and her ability to lead others. Soon, other young women joined her in giving regular instruction to the children in their neighborhood, and it developed into a place where girls who had no other opportunities to study could come to learn.

One day she received the opportunity to make a pilgrimage to the Holy Land. This was an amazing thing for her – she had never traveled far from home, and she was very excited as she began the great journey with a group of her friends. When they had gotten as far as the island of Crete, she was struck with blindness. Her friends wanted to return home, but she insisted on going through with the pilgrimage, and she visited the sacred shrines with as much devotion and enthusiasm as if she had her sight. On the way back, while praying before a crucifix, her sight was restored at the very same place where it had been lost.

At the age of 57, she organized a group of twelve young women to help her in catechetical work. Four years later the group had increased to twenty-eight. She formed them into the Company of St. Ursula, who was the patroness of medieval universities and venerated as a leader of women. Their purpose was to re-build family life through the solid Christian education of future wives and mothers. The importance of the education of children was beginning to be seen as more and more essential, and we see it being developed through such people as St. Elizabeth Ann Seton and St. John Neumann, who were simply carrying on the work of people like St. Angela.

O God, who through thy blessed Saint Angela didst cause a new household of Virgins consecrated to thy service to be established in thy Church: grant us, we pray thee, by her intercession, so to live after the manner of thy holy Angels; that, putting aside all things earthly, we may be found worthy to rejoice in everlasting felicity; through Jesus Christ thy Son our Lord, who liveth and reigneth with thee, in the unity of the Holy Spirit, ever one God, world without end. Amen.

Posted by Fr. Christopher George Phillips at 9:22 AM