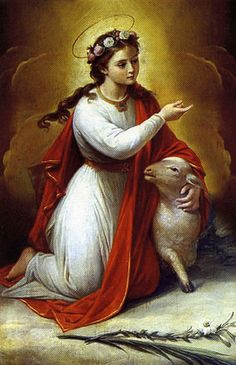 St. Agnes was a Roman girl who was only twelve or thirteen years old when she suffered martyrdom for her Faith. Agnes had made a promise, a promise to God never to stain her purity. Her love for the Lord was very great and she hated sin even more than death! Since she was very beautiful, many young men wished to marry Agnes, but she would always say, "Jesus Christ is my only Spouse."

Procop, the Governor's son, became very angry when she refused him. He had tried to win her for his wife with rich gifts and promises, but the beautiful young girl kept saying, "I am already promised to the Lord of the Universe. He is more splendid than the sun and the stars, and He has said He will never leave me!" In great anger, Procop accused her of being a Christian and brought her to his father, the Governor. The Governor promised Agnes wonderful gifts if she would only deny God, but Agnes refused. He tried to change her mind by putting her in chains, but her lovely face shone with joy. Next he sent her to a place of sin, but an Angel protected her. At last, she was condemned to death. Even the pagans cried to see such a young and beautiful girl going to death. Yet, Agnes was as happy as a bride on her wedding day. She did not pay attention to those who begged her to save herself. "I would offend my Spouse," she said, "if I were to try to please you. He chose me first and He shall have me!" Then she prayed and bowed her head for the death-stroke of the sword.

The following is an account of the martyrdom of St. Agnes, described by St. Ambrose as he writes "On the Dignity of Virginity":

It is the birthday of St. Agnes, let men admire, let children take courage, let the married be astounded, let the unmarried take an example. But what can I say worthy of her whose very name was not devoid of bright praise? In devotion beyond her age, in virtue above nature, she seems to me to have borne not so much a human name, as a token of martyrdom, whereby she showed what she was to be.

But I have that which may assist me. The name of virgin is a title of modesty. I will call upon the martyr, I will proclaim the virgin. That panegyric is long enough which needs no elaboration, but is within our grasp. Let then labour cease, eloquence be silent. One word is praise enough. This word old men and young and boys chant. No one is more praiseworthy than he who can be praised by all. There are as many heralds as there are men, who when they speak proclaim the martyr. She is said to have suffered martyrdom when twelve years old. The more hateful was the cruelty, which spared not so tender an age, the greater in truth was the power of faith which found evidence even in that age. Was there room for a wound in that small body? And she who had no room for the blow of the steel had that wherewith to conquer the steel. But maidens of that age are unable to bear even the angry looks of parents, and are wont to cry at the pricks of a needle as though they were wounds. She was fearless under the cruel hands of the executioners, she was unmoved by the heavy weight of the creaking chains, offering her whole body to the sword of the raging soldier, as yet ignorant of death, but ready for it. Or if she were unwillingly hurried to the altars, she was ready to stretch forth her hands to Christ at the sacrificial fires, and at the sacrilegious altars themselves, to make the sign of the Lord the Conqueror, or again to place her neck and both her hands in the iron bands, but no band could enclose such slender limbs.

A new kind of martyrdom! Not yet of fit age for punishment but already ripe for victory, difficult to contend with but easy to be crowned, she filled the office of teaching valour while having the disadvantage of youth. She would not as a bride so hasten to the couch, as being a virgin she joyfully went to the place of punishment with hurrying step, her head not adorned with plaited hair, but with Christ. All wept, she alone was without a tear. All wondered that she was so readily prodigal of her life, which she had not yet enjoyed, and now gave up as though she had gone through it. Every one was astounded that there was now one to bear witness to the Godhead, who as yet could not, because of her age, dispose of herself. And she brought it to pass that she should be believed concerning God, whose evidence concerning man would not be accepted. For that which is beyond nature is from the Author of nature.

What threats the executioner used to make her fear him, what allurements to persuade her, how many desired that she would come to them in marriage! But she answered: It would be an injury to my spouse to look on any one as likely to please me. He who chose me first for Himself shall receive me. Why are you delaying, executioner? Let this body perish which can be loved by eyes which I would not. She stood, she prayed, she bent down her neck. You could see the executioner tremble, as though he himself had been condemned, and his right hand shake, his face grow pale, as he feared the peril of another, while the maiden feared not for her own. You have then in one victim a twofold martyrdom, of modesty and of religion. She both remained a virgin and she obtained martyrdom.

Almighty and everlasting God, who dost choose the weak things of the world to confound those things that are strong: mercifully grant that we, who keep the festival of blessed Agnes thy Martyr, may perceive within ourselves the effect of her prayers; through Jesus Christ thy Son our Lord, who liveth and reigneth with thee, in the unity of the Holy Spirit, ever one God, world without end. Amen.
Posted by Fr. Christopher George Phillips at 9:40 AM