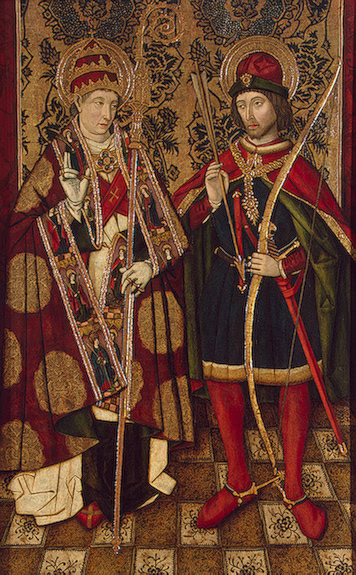 January 20th is the commemoration of two great 3rd century martyrs – one a pope, and one a soldier.

St. Fabian was simple farmer but was an extraordinary person, who took his Catholic faith very seriously. One day he came into the city of Rome from the countryside, but this wasn’t just any day – it happened to be the day when a new pope was being chosen. Who knows? Perhaps Fabian had come to Rome that day out of curiosity, to see who the next pope would be, or perhaps it was some other business that brought him there. But he was there on that particular day. Those who had gathered to elect the next pope prayed for a sign. They probably had no idea that God would give them such a clear sign, because at that very moment a dove flew towards Fabian and settled on his head. They took this as a sign that Fabian had been chosen by God. Although he was not even ordained at the time, he was immediately acclaimed by the whole city of Rome. He was ordained and installed as pope. Fabian’s fourteen year reign as pope was fairly peaceful, but the end came with a new persecution by the Emperor Decius. Fabian was one of the first to be martyred during that persecution, in the year 250.

St. Fabian is commemorated on the same day as is St. Sebastian, although they lived in very different circumstances. St. Sebastian was born in Gaul, and he came from a rich Roman family, who sent him to Milan for his education. He became an officer in the Imperial Roman army and captain of the guard, and was known for his goodness and bravery. He was a favorite of Emperor Diocletian. It was during the persecution by Diocletian that Sebastian visited Christians in prison, bringing them supplies and comfort. He even healed the wife of one of the soldiers by making the sign of the cross over her. Seeing his witness, many soldiers and even a Roman governor became Christians.

Diocletian ordered Sebastian to give up his Christian faith but he refused. It was then that Sebastian was tied to a tree and archers shot arrows into his body and left him for dead. When a devout Christian woman came to bury him, she was amazed to find him still alive. She took him to her home and nursed his wounds. When Sebastian was well enough, the woman pleaded with him to escape the dangers of Rome. But Sebastian was a brave soldier. He would not run away. He returned to preach to Diocletian and urged him to stop torturing the Christians.

The emperor was shocked to see Sebastian alive. He refused to listen to what Sebastian had to say, and ordered that Sebastian be immediately clubbed and beaten to death. He died in 288.

St. Fabian’s remains are in the Basilica of St. Sebastian, and these two, whose lives were so different, were linked together by their common faith, and are two of our great martyrs.

Grant, we beseech thee, Almighty God: that we, on this day devoutly observing the feast of thy holy Martyrs Saints Fabian and Sebastian, may thereby increase in godliness to the attainment of everlasting salvation; through Jesus Christ thy Son our Lord, who liveth and reigneth with thee, in the unity of the Holy Ghost, ever one God, world without end. Amen.

Posted by Fr. Christopher George Phillips at 10:14 AM