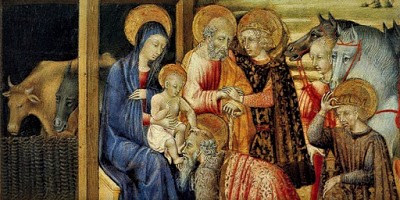 Many newspapers and magazines and television news programs use the first days of a new year to publish a recap of the previous year. At a glance we’re reminded of those things that captured our attention and were the subjects of our conversations. But we should also remember that during those same twelve months there were approximately 130 million babies born in the world, almost every one of them anonymous. Unless they were family or friends, their births meant little to us, whereas the big news events were what kept our attention.

A few thousand years ago the world was filled with political intrigue. The enormous military might of Rome captured the attention of the world. The emperor Caesar Augustus had ordered a census to be taken so he could increase taxes. The greed of one man caused an upheaval in the lives of millions of anonymous people. Everyone was thinking about this oppressive empire, and all the talk was of the hardship it was causing.

While the attention of the whole world was on Rome, few people noticed a young couple making an eighty-mile trip south from Nazareth to Bethlehem. Who cared about a Jewish couple heading for Bethlehem, when Rome was making such an impact on the world? Who cared that the young woman was expecting a child, when there were bigger things to be concerned with? Yet the impact of this anonymous birth upon the world would be beyond anything Caesar Augustus could have imagined. While Rome was busy making history, God had descended into history in the person of Jesus Christ, who had been conceived by the power of the Holy Spirit, and who was now about to be born in an obscure corner of the greatest empire ever to exist.

Time and time again, man has been caught up in the events of history, but misses what’s really important. And just as those who were living at the time ignored the birth of the God-Man, so men have continued to ignore it since that time, and there are even many today who still overlook the birth of Jesus and its consequences. Times have changed, but Man has not; and the reactions to the birth of Christ at the time have been repeated throughout history.

Look at how Herod the king reacted. Herod was first and foremost a self-absorbed and wicked man. If he showed any mercy or justice, it was only because he would eventually benefit from it himself. He married his wife only because he thought that by marrying a Jewish woman it would soften the hearts of his subjects towards him. He was a jealous man, suspicious, and constantly afraid that someone would take his position and power from him. And because of his jealousies and suspicions, he had his brother-in-law drowned, he had his wife and her mother killed, and finally he killed three of his own sons. In fact, shortly before his own death, he had the most distinguished citizens of Jerusalem imprisoned and ordered them executed the moment he died. Why? Because he wanted to make sure there was mourning when he died, and if people didn’t mourn his death, they’d at least be mourning something! And that barbaric act was surpassed only by his slaughter of all the male children two years and younger who were in Bethlehem and in the surrounding area, in an attempt to kill the one of them whom the wise men had said was born king of the Jews.

The hostility shown by Herod towards Christ has been a thread throughout history ever since. The leaders of the Roman Empire did their best to stamp out the Church, murdering countless of Christ’s followers, because they perceived the Gospel to be a threat to their own position and power. Whole political systems have been founded upon a hatred of God, with an institutional hostility to the birth of Jesus and all that it means. And we don’t need to look as far away as systems such as communism to find that hostility; we have it increasingly in our own country, where freedom of religion has been twisted into freedom from religion, attempting to go so far as to outlaw the public mention of God, and the banishment of any public display of Christian symbols. Even innocent human life is wantonly destroyed because of the greed and selfishness that so often accompanies godlessness.

But it wasn’t just Herod’s hostility that greeted the birth of Christ. There was that equally damaging attitude called indifference – and we see this attitude in the chief priests and scribes. The Gospel tells us that when Herod heard that a king had been born, he gathered these Jewish leaders to find out where prophecy foretold that the Christ would be born. They gave him the information he asked: “In Bethlehem of Judea, for so it has been written by the prophet.” And that’s all we hear from them. Now understand who these people were. They were the religious leaders in the Temple. They were the expert scholars of Judaism. But when Herod called them together to find out where the Messiah was to be born, did they show any interest, or any curiosity about what the wise men had reported? Not at all. They were able to tell Herod what he wanted to know, but they showed no excitement whatsoever when the wise men said that they had seen a star indicating the birth of the Messiah. And these were the people who had been waiting for the Messiah for generations!

How is it today that people can hear the Gospel and they can see what Christ does in people’s lives, and yet be indifferent towards Him? How is it that the greatest mystery of all time can be celebrated at every Catholic altar, and yet people find excuses to stay away? How is it that Christ can hold out the promise of healing and wholeness and eternal life, and yet people feel no need to respond to him? The indifference of the chief priests and scribes later turned into animosity towards Christ, until they became His enemies. And that can happen to anyone who ignores Him. We cannot stay indifferent forever; men will either love Christ, or eventually they’ll come to hate Him.

But Epiphany tells us of one more attitude at the birth of Christ. Herod had his hostility; the Jewish leaders had their indifference; but the wise men gave their worship. When they left Herod, they went to Bethlehem. The star stood over the place where the child King was, and when they found the One for whom they had searched, they fell down and worshipped Him. And not only did they worship Him, but they presented gifts to him. Their giving was part of their worship. They gave because of the love and adoration they had for the Incarnate God.

Now, having looked at these three attitudes, the obvious question is, “What about us?” No doubt, every one of us wants to be counted in with the wise men. But every one of us would also have to admit that there are times when we’re hostile to Christ – when we feel as though what He asks of us cramps our style, or isn’t convenient for us. When we know what Christ requires of us, but we willfully ignore it, we’re putting ourselves right there with Herod. Christ demands our obedience, not just when we agree with Him, but also when He asks something difficult of us.

And every one of us would have to admit to moments of indifference – those times when we convince ourselves that something else is more important than prayer, or missing Mass once in while isn’t going to hurt, or someone else can take care of that person in need. Unfortunately, every one of us can find all sorts of ways to ignore Christ.

No, we should want to be like the wise men, who sought the Promised One, and when they found Him, they could do nothing but fall down before Him, and present Him with the best they had. The Gospel tells us that they were warned in a dream not to return to Herod, so they went back to their own country “by another way.”

It wasn’t just a different route they took. Everything was changed for them. They were transformed. They had met God face to face, and they weren’t the same when they returned home. This is what happens when we come to Christ; when we worship Him with our whole being, with all that we are and all that we have. God changes us. His epiphany becomes our own. He manifests Himself – and He wants to show Himself to the world through our own transformed lives.
Posted by Fr. Christopher George Phillips at 10:24 AM