Christ's Baptism: At One With Us 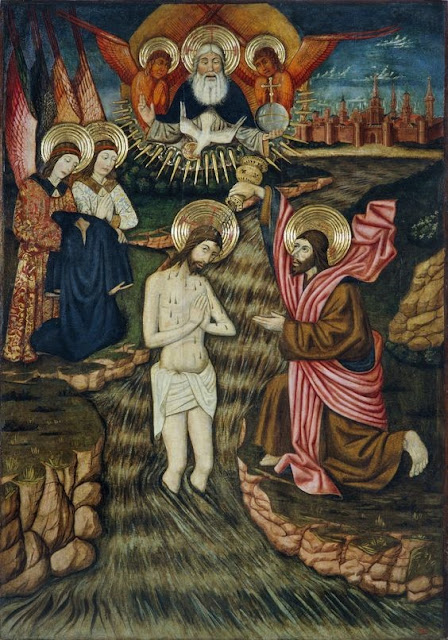 Like so many other pious Jews, our Lord Jesus Christ came to John and let him baptize Him. And in first thinking about it, it’s strange that He would have done that. If Jews were receiving John’s baptism as a sign of repentance and to mark a new beginning, why would Christ go through it? As the sinless Incarnate God, He certainly had nothing for which He had to repent, and as the eternal Son of God – in Whom is no beginning and no end – He wouldn’t be marking a new beginning. So we can understand John’s initial reaction of being hesitant. God had already revealed to John the real identity of Jesus, so of course John would protest the whole idea of baptizing Christ.

When we put together all the Gospel accounts of the baptism of Christ, we learn a number of things.

The scripture is clear in telling us that the Lord was baptized “when all the people were baptized.” In other words, it was done publicly, at the same time as others were being baptized. When Christ was baptized, He looked like the countless other Jews who were lined up along the Jordan River. And this is an important point: although He was the Incarnate Word of God, outwardly Jesus led a life like the lives of other Jews. As an infant He was circumcised, and then was presented in the Temple in accordance with traditional Jewish practice. He took part in the customary pilgrimages to Jerusalem. He attended the synagogue, and He worked like other Jewish men. Nothing particularly distinguished Him from those around Him – so much so, that later on during His earthly ministry, people began to ask, “Where does He get these ideas? Isn’t He the son of Joseph the carpenter? Isn’t Mary His mother? Don’t we know His family?” To all outward appearances, Jesus was a typical Jewish boy who grew into typical Jewish manhood, faithfully following the demands of the Law.

And this principle applies to His baptism, too. Christ wanted to make it clear that He was truly “at one” with those He had come to save. Now, certainly, He didn’t have any sin or guilt for which He had to ask pardon; rather, His baptism was a profound expression of union with mankind. And this is reason enough for His baptism to be important to us. It shows Christ to be one of us. It reminds us that He knows our deepest needs. He knows our longing to be forgiven and to be restored to a right relationship with God. But His baptism proclaims much more than that.

The Gospel tells us that the heavens were opened, the Holy Spirit descended, and the Father’s voice said “You are my Son, in whom I am well pleased.” The prophet Isaiah had foretold this generations before, when he wrote, “Behold my servant, whom I uphold, my chosen, in whom my soul delights; I have put my spirit upon him.” And ever since that prophecy the people had been looking for the coming of this servant. He would be a servant who would inaugurate a new age. He would “bring forth justice to the nations.” In Him, the old darkness would be swept away, and the new age of God’s light would dawn. This servant would “open the eyes that are blind.” He would “bring prisoners from the dungeon, from the prison those who sit in darkness.” No more would mankind have to grope blindly for the truth, hoping to find God. No, now God would seek out man, and would come to him. And in Christ, God had come very near indeed; in fact, He was in the world, even though the world did not recognize Him.

So, with the baptism of Jesus, something new was beginning, something that would give mankind access to God in a way which had never existed before. It was as though every twisting thread of history was converging at this point, when Jesus was publicly manifested as the Son with whom the Father was well-pleased. Christ was the long-awaited Servant who had come to do the Father’s will. And the Father’s will is to open the way of salvation to the whole world – not just to the Jews, but to everybody.

In this baptism, the first public act of His earthly ministry, Christ wanted to manifest His closeness and unity with us. He wanted to emphasize the unique importance of what He had come to do. He wanted it to serve as a pledge that He would strengthen us in all that God has called us to do as a result of our own baptism.

HEAVENLY Father, whose blessed Son Jesus Christ did take our nature upon him, and was baptised for our sakes in the river Jordan: mercifully grant that we, being regenerate and made thy children by adoption and grace, may also be partakers of thy Holy Spirit; through the same Jesus Christ thy Son our Lord, who liveth and reigneth with thee, in the unity of the Holy Spirit, ever one God, world without end. Amen.