"With God nothing will be impossible." 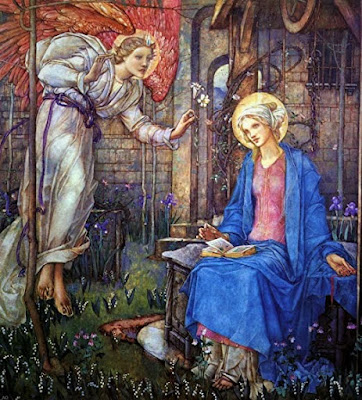 The angel Gabriel was sent from God to a city of Galilee named Nazareth, to a virgin betrothed to a man whose name was Joseph, of the house of David; and the virgin’s name was Mary. And he came to her and said, “Hail, full of grace, the Lord is with you!”

Until that time the prophets had been called to announce the will of God to a particular people in a particular place. But God has revealed something not just to the Children of Israel, but to the whole world. Until then prophets and kings had desired to see this great thing, but they had not been so privileged. In fact, no human being was to know it before it was revealed to the Virgin herself.

The archangel Gabriel, who stands in the presence of God, always ready to announce the divine Will of God to mankind, was the messenger. The purpose in visiting Nazareth was to announce the coming of the God-Man.

We can never know what Mary was thinking when the archangel came to her. We can only imagine that Gabriel’s gaze was kind and steady as the words were spoken to her – words which have woven themselves into our own devotion: “Hail, full of grace, the Lord is with you…” And the archangel went on to deliver the divine message: “You will conceive in your womb and bear a son, and you shall call his name Jesus. He will be great, and will be called the Son of the Most High; and the Lord God will give to him the throne of his father David, and he will reign over the house of Jacob forever; and of his kingdom there will be no end.”

In simplicity Mary asks a question: “How can this be...?” Gabriel makes everything clear to her: “The Holy Spirit will come upon you, and the power of the Most High will overshadow you; therefore the child to be born will be called holy, the Son of God…” and then those beautiful words of assurance: “…for with God nothing will be impossible.” And it was when Mary heard those words that she eagerly replied, “Behold, I am the handmaid of the Lord; let it be to me according to your word.” In those words was the obedience which would change history.

“For with God nothing will be impossible.” That’s what strengthened Mary and opened the door to her complete obedience to God’s plan. And in the face of the difficulties we sometimes have in our own lives, with the decisions we have to make, and with the responsibilities we have, we should remember the words of Gabriel to the Virgin Mary: “with God nothing will be impossible.”
When we seem to be almost crushed with worry or confused by the many thing in this life that try to draw us away from our life in Christ, we should remember those words. Those are the words which contain God’s promise that He will be with us in all things, just as He was with Mary. His promise, and her faithfulness, meant that she bore the Incarnate Word for the salvation of the world.

And God makes the promise to us – that with Him nothing will be impossible. All He asks is that we say “yes” to what we’ve been called to do – to pour our heart and soul into our marriage, into being parents to our children, into the priesthood, into religious life – whatever our state in life, and whatever our vocation, to seek God’s Will and then to do it.
It really is that simple. It may not always be easy, but it is quite simple. God is asking for our obedience in remaining faithful to Him – and if we do that, He’ll give us the grace and the strength to meet every challenge, and to bear the good fruit of the Incarnate Word in our own lives, so that through our cooperation, the world might be sanctified, and that all mankind might come to know Emmanuel – the fact that God is with us, in our Saviour Jesus Christ.
_____________________________________________________________
Painting: "The Annunciation" by Edward Reginald Frampton (1870 – 1923)
Posted by Fr. Christopher George Phillips at 10:30 AM