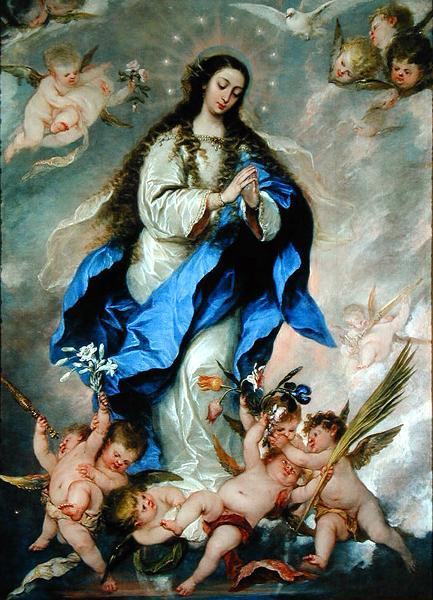 [Several years ago I wrote articles for a now-defunct blog called "The Anglo-Catholic."  It was intended to assist those who were considering a move into full Catholic communion, and I wrote this article to explain in simple terms the doctrine of the Immaculate Conception.]
___________________________________
It was our beloved and venerable Archbishop Fulton Sheen who famously said, “There are not over a hundred people in the United States who hate the Catholic Church. There are millions, however, who hate what they wrongly believe to be the Catholic Church…” He was referring, of course, not simply to the institution, but more to what the Catholic Church teaches.

Over the years in my work with converts to the Faith, there are usually certain predictable teachings that are like “red flags” to those who are inquiring about Catholic teaching. Along with issues such as Papal Infallibility, one of the biggest “red flags” tends to be the dogma of the Immaculate Conception of the Blessed Virgin Mary.

Let’s look first at what this doctrine is not. It does not refer to the conception of Christ in the womb of Mary, nor does it mean that Mary was somehow miraculously conceived. Mary was conceived in the normal way as the natural fruit of the marriage of Ss. Joachim and Anne, but at the moment of her conception God preserved her from original sin and its stain.

As we know, the sin of our first parents, Adam and Eve, became their bitter legacy to us. Original sin deprives us of sanctifying grace, and the stain of original sin corrupts our human nature. But by God’s grace, given at the moment of Mary’s conception, she was preserved from these defects, and so from the first instant of her existence Mary had the fullness of sanctifying grace, and was unburdened by the corrupt nature caused by original sin. In this way, Mary becomes a “second Eve,” conceived in the same state of original purity as God intended for mankind.

Why would God do this? We state the reason every time we say the Creed. When we profess that Jesus Christ “was incarnate by the Holy Ghost of the Virgin Mary,” we’re proclaiming that God took human flesh upon Himself. And from whom did He take that flesh? From Mary. So the question must be asked: would God – who can have no part in sin – take upon Himself that which was fallen, stained and corrupt? The answer is obvious: of course He wouldn't. So, as we can see already, the doctrine of the Immaculate Conception has as much to do with our Lord Jesus Christ and His Incarnation, as it does with the Blessed Virgin Mary. In fact, as we explore the various Marian dogmas, we see this consistently. What God does in and through Mary finds its ultimate purpose in Jesus Christ.

We can find a strong implicit reference to the Immaculate Conception in St. Luke 1:28. In the original Greek text. When the archangel Gabriel is addressing the young Virgin Mary, the word used is translated to say that she is “full of grace.” In some translations of scripture, Gabriel’s words are translated as “highly favored one,” but that translation doesn’t capture the best and fullest meaning. The original Greek clearly indicates that Mary was filled with grace in the past, and the effect of it continues into the present. Understanding that, it’s apparent that the grace received by Mary didn’t come about through Gabriel’s visit; rather, she was always filled with grace.

Here’s another point used by those who doubt the doctrine of the Immaculate Conception: They ask, “What about the words Mary spoke in her Magnificat, when she says, “my spirit rejoices in God my Saviour…”? If she wasn’t a sinner, why would she need a Saviour?” Remember, Mary was a human being, a descendant of Adam and Eve. When she was conceived, she was certainly subject to the contracting of original sin, like all of us. But she was preserved from it – and how so? By grace. Mary was redeemed by the grace of Christ, but in a special way; that is, by anticipation. There’s a helpful analogy which has been used by the Church to illustrate this very fact: a man falls into a deep pit, and somebody reaches down and pulls him out. It would be true to say that the man was “saved” from the pit. A woman is walking by that same pit, and she’s about to fall in, but at that very moment someone reaches out and pulls her back from the edge. She also has been “saved” from the pit. And in fact, she didn’t even get dirty like the poor man did, who actually fell in. God, who is outside of time, applied Christ’s saving grace to Mary before she was stained by original sin, rather like the woman in the story who didn’t get dirty because she was prevented from falling into the pit. So yes, Mary had a Saviour, and He is none other than Christ, her Son and her Lord.

Then we’ve got Romans 3:23, where St. Paul says that “all have sinned and fall short of the glory of God…” Did St. Paul mean this statement to be understood in an all-inclusive, no-one-excluded way? Well, let’s consider. First of all, we certainly have to exclude Jesus Himself. Even though He was fully man, we know He didn’t sin. And what about a new-born baby? If sin is the deliberate disobedience to God’s law, could we say that a little baby has committed sin? I don’t think so. Although St. Paul was certainly stating the truth about mankind, his purpose in writing this section of Romans wasn’t to discuss the possibility of exceptions; rather he was constructing an important argument about law and grace, justification and redemption. If anybody wants to apply Romans 3:23 to Mary, then they’d have to apply it to babies and young children, too.

Tragically, after the fall of our first parents, sin became commonplace and even expected. In fact, think about how often someone will say, after doing something wrong, “Well, I’m only human,” as though sin is perfectly natural, and somehow even defines humanity. Actually, sin is unnatural. We weren’t created to sin; we were created to know God, and to love Him, and to spend eternity with Him in heaven. In Mary, because of the Immaculate Conception, we see a human being as God intends all of us to be. What was maimed by the first Adam and Eve, is restored by the Second Adam and the Second Eve.

So then, what about the Immaculate Conception? It is logical. It is scriptural. And it is definitely an essential ingredient in God’s loving act of redemption.

O GOD, who in the foreknowledge of thy Son’s most precious death didst consecrate for him a dwelling-place by the immaculate conception of the Blessed Virgin Mary: mercifully grant that she who was preserved from all defilement, may evermore pray for us, until we attain unto thee in purity of heart; through the same Jesus Christ thy Son our Lord, who liveth and reigneth with thee, in the unity of the Holy Spirit, ever one God, world without end. Amen.