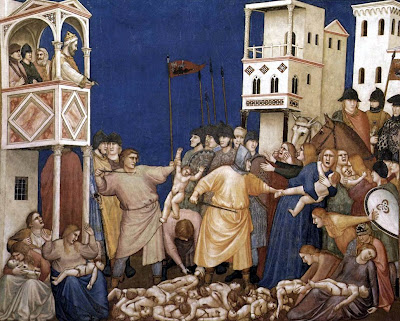 In the midst of celebrating the incarnation of holy innocence, our joy is tempered by the remembrance of the deaths of the Holy Innocents. A wicked ruler ordering death much as he might order the destruction of an unwanted animal; terrified parents seeing their children's blood on the same streets where their families had walked for generations; brutalized children having their lives stolen scarcely after they had begun; a whole town maimed beyond recognition, all because the sin of Adam and Eve necessitated the birth of a Saviour.

We relate the slaughter of the Holy Innocents to the millions of children murdered through abortion -- and quite rightly so. But the horror of abortion is something that goes even beyond what happened on the streets of Bethlehem. The deaths of those little boys in Bethlehem afforded some safety to the Christ Child, because the sly Herod thought he had accomplished his purpose, and so the Holy Family was able to continue unmolested on its journey to the safety of Egypt. Those little boys, even in their suffering, had parents who did all they could to protect them from the violence descending upon them. Those little boys were named, and they were loved, and they were incorporated into God's family through the religious rites attended to by their mothers and fathers. The little boys of Bethlehem are remembered even today, and their deaths are able to be seen as being directly related to the mystery of the Holy Incarnation.

But the little victims of abortion... theirs is a holocaust that defies description. Not a single action of a single wicked ruler are their deaths; rather, their deaths are "a matter of choice" -- choices made by the very ones who should be protecting their innocent lives. These are not deaths being endured for any noble cause. These are deaths born of ignorance, of selfishness, of greed, of any number of the spoiled fruits of sin.

As we remember the deaths of the Holy Innocents, pray also for those who are being murdered in their holy innocence. And pray, too, that the twisted hearts which allow and encourage such unspeakable things might be changed.

O Almighty God, who out of the mouths of babes and nurslings hast ordained strength, and madest infants to glorify thee by their deaths: mortify and kill all vices in us; and so strengthen us by thy grace, that by the innocency of our lives, and constancy of our faith, even unto death, we may glorify thy holy Name; through Jesus Christ thy Son our Lord, who liveth and reigneth with thee, in the unity of the Holy Spirit, ever one God, world without end. Amen.