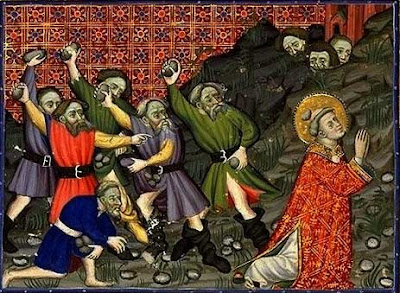 Saint Stephen was one of the first ordained deacons of the Church. He is also the first Christian martyr. The Greek word from which we derive the English word martyr literally means witness. In that sense, every Christian is called to bear witness to Jesus Christ, in both their words and their actions. Not all are asked to shed their blood.

Those who shed their blood for the faith are the greatest of witnesses. They have been especially honored since the very beginning of Christianity. Stephen was so conformed to Jesus in his holy life that his martyrdom was both a natural and supernatural sign of his love for the Lord. It also inspired the early believers as they faced the first round of brutal persecution.

His name means “crown” and he was the first to be martyred. His final words showed his understanding that Christ had come not just for the Jews, but for the whole world.

As he was being stoned, the young rabbi holding the cloaks of those who were stoning Stephen was named Saul, and what he saw in this young martyr eventually led to his own conversion.

I find it spiritually invigorating to move so rapidly from celebrating the birth of Our Lord, into the next day's commemoration of the first one to die for faith in that same Lord. St. Stephen, the great deacon, the compelling preacher, the martyr whose blood was a seed of faith in St. Paul, his was a life which showed very early that the Catholic faith was not designed for cowards!

When I celebrate Mass each year on St. Stephen's Day, it is a special day for me as it is the anniversary of my father's death, and it is a privilege to be able to pray for the repose of the soul of George William Phillips.  It makes the day bittersweet - it seems to me to be right for such a good man to have died on the feast of such a good saint.

Grant, O Lord, that in all our sufferings here upon earth, for the testimony of thy truth, we may steadfastly look up to heaven, and by faith behold the glory that shall be revealed: and, being filled with the Holy Spirit, may learn to love and bless our persecutors, by the example of thy first Martyr Saint Stephen; who prayed for his murderers to thee, O blessed Jesus, who standest at the right hand of God to succour all those that suffer for thee, our Mediator and Advocate; who livest and reignest with the Father, in the unity of the Holy Spirit, ever one God, world without end. Amen.