St. Joseph and his dream... 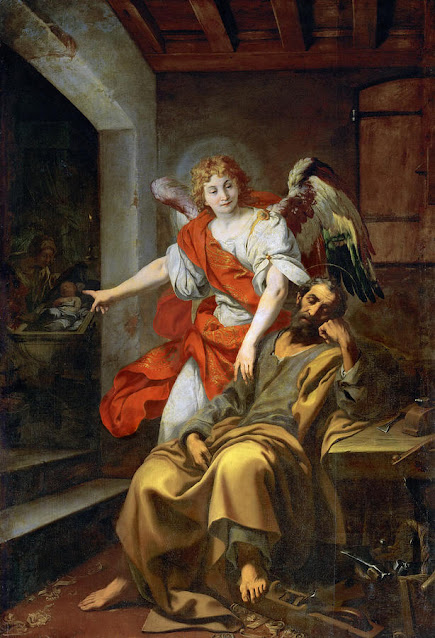 Now the birth of Jesus Christ took place in this way. When his mother Mary had been betrothed to Joseph, before they came together she was found to be with child of the Holy Spirit; and her husband Joseph, being a just man and unwilling to put her to shame, resolved to divorce her quietly. But as he considered this, behold, an angel of the Lord appeared to him in a dream, saying, "Joseph, son of David, do not fear to take Mary your wife, for that which is conceived in her is of the Holy Spirit; she will bear a son, and you shall call his name Jesus, for he will save his people from their sins." All this took place to fulfill what the Lord had spoken by the prophet: "Behold, a virgin shall conceive and bear a son, and his name shall be called Emmanuel" (which means, God with us). When Joseph woke from sleep, he did as the angel of the Lord commanded him.

What we know of St. Joseph for certain, we know from the Gospels. It's there that we see him to be a man who was determined to do what is right in the sight of God, and to do it in a kindly way.

He was betrothed to Mary. According to Jewish practice, betrothal was as sacred as marriage. Because of that, any infidelity before the actual marriage was treated in the same way as infidelity after marriage: death by stoning was the punishment for such sin. By all human appearance, Mary was in just such circumstances, and Joseph had to act in the way that seemed best. He was a just man, but he was a kind man, too, and surely what was revealed to him about Mary made a great demand on his faith.

But that is the point: Joseph was, above all, a man of faith and completely obedient to the divine Will of Almighty God. When it was revealed to him that Mary was to bear the Incarnate Son of God he took her to be his wife. There was no hesitation, no consideration of what others might think or how they might judge. It mattered little to him that it was assumed he was the human father of this Child – not that he would have encouraged others to believe such a thing, for he knew the truth – but it was better than having people think that Mary had shamefully conceived with someone else. So Joseph took the responsibility, knowing one day the truth would be known, and that Truth "would make men free."
Posted by Fr. Christopher George Phillips at 9:39 AM