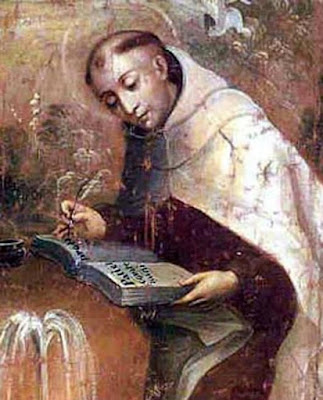 St. John of the Cross was born in Spain in 1542, and he learned some important lessons from his parents - especially the importance of sacrificial love. His father gave up tremendous wealth and social status when he fell in love and married a weaver's daughter, and was disowned by his noble family. After his father died, John’s mother kept the destitute family together as they wandered homeless in search of work. These were the examples of sacrifice that John followed as he came to know that one great love in his own life -- God.

O God, who didst give to blessed St. John of the Cross, thy Confessor and Doctor, grace to show forth a singular love of perfect self-denial and of bearing thy Cross: grant, we beseech thee; that we cleaving steadfastly to his pattern, may attain to everlasting glory; through Jesus Christ thy Son our Lord, who liveth and reigneth with thee in the unity of the Holy Ghost, ever one God, world without end. Amen.
Posted by Fr. Christopher George Phillips at 2:52 PM