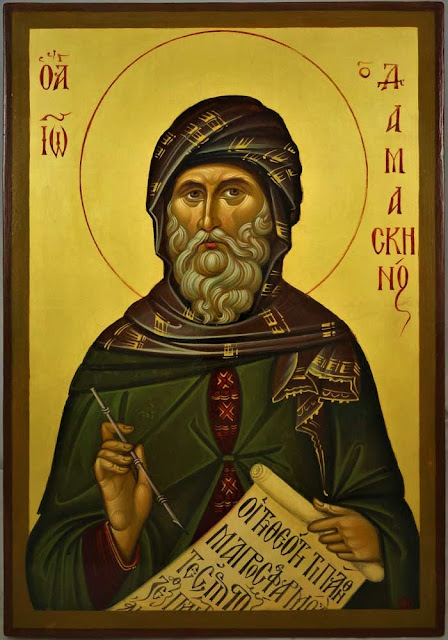 St. John of Damascus or Damascene was one of the principal defenders of the veneration of images against the Iconoclasts, who condemned this practice.

When John was born, Damascus was under the jurisdiction of caliphs, but Christians were allowed to hold high offices. John's father was chief revenue officer of the caliph and a sterling Christian. He entrusted his son's education to a monk, Cosmas, who had been brought from Sicily as a slave, and who schooled the young man in theology, the sciences, and poetry.

John succeeded his father in office, and while living at the court gave an example of a model Christian. But he had set his sights higher, and after resigning his office he became a monk at St. Sabbas monastery near Jerusalem. Here he spent his time writing books and composing hymns. When Leo the Isaurian issued decrees against the veneration of images, John took up the challenge and wrote treatises defending this ancient practice.

At this time the Patriarch of Jerusalem, desirous of having John among his clergy, ordained him priest and brought him to Jerusalem. After some time, however, John returned to the monastery and devoted the rest of his life to writing. His most important work is his Fountain of Wisdom, in which he compiled and collated the teachings of all the great theologians before him; this is the first attempt at a Summa Theologica, a summary of philosophy and theology, that has come down to us. John's writings are a rich treasure of ancient traditions, and are held in high esteem. Pope Leo XIII declared him a Doctor of the Church in 1890.

St. John was such a great orator that he was known as Chrysorrhoas ("golden-stream"). He was the last of the Greek Fathers of the Church, and the first of the Christian Aristotleans. He also adapted choral music for use in the liturgy. His eloquent defense of Christian images has given him the title of "Doctor of Christian Art."

Confirm our minds, O Lord, in the mysteries of the true faith, set forth with power by thy servant St. John of Damascus; that we, with him, confessing Jesus to be true God and true Man, and singing the praises of the risen Lord, may, by the power of the resurrection, attain to eternal joy; through Jesus Christ our Lord, who liveth and reigneth with thee and the Holy Spirit, one God, now and for ever. Amen.

Posted by Fr. Christopher George Phillips at 11:08 AM