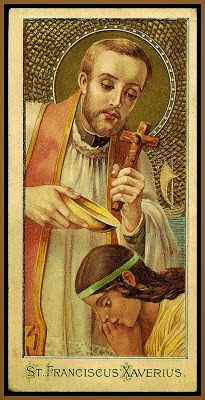 Jesus asked, "What profit would there be for one to gain the whole world and forfeit his life?" The words were repeated to a young teacher of philosophy who had a highly promising career in academics, with success and a life of prestige and honour before him.

Francis Xavier, 24 at the time, and living and teaching in Paris, did not heed these words at once. They came from a good friend, Ignatius of Loyola, whose tireless work and example finally won the young man to Christ. Francis then made the spiritual exercises under the direction of Ignatius, and in 1534 joined his little community, known as the Society of Jesus. Together they vowed poverty, chastity and apostolic service according to the directions of the pope.

From Venice, where he was ordained priest in 1537, Francis Xavier went on to Lisbon. From there he sailed to the East Indies, landing on the west coast of India. For the next 10 years he laboured to bring the faith to such widely scattered peoples as the Hindus, the Malayans and the Japanese. He spent much of that time in India, and served as provincial of the newly established Jesuit province of India.

Wherever he went, he lived with the poorest people, sharing their food and rough accommodations. He spent countless hours ministering to the sick and the poor, particularly to lepers. Very often he had no time to sleep or even to say his breviary but, as we know from his letters, he was filled always with joy.

Francis went through the islands of Malaysia, then up to Japan. He learned enough Japanese to preach in a simple way, to instruct and to baptize, and to establish missions for those who were to follow him. From Japan he had dreams of going to China, but this plan was never realized. Before reaching the mainland he died.

It is estimated that St. Francis Xavier baptized more than 100,000 people during his years as a missionary. The relic of his right forearm is at the Church of the Gesu in Rome, a remembrance of the power of the Gospel to bring people to new life in Christ through baptism.

Almighty God, who willest to be glorified in thy saints, and didst raise up thy servant St. Francis Xavier to be a light in the world: Shine, we pray thee, in our hearts, that we also in our generation may show forth thy praise, who hast called us out of darkness into thy marvelous light; through Jesus Christ our Lord, who liveth and reigneth with thee and the Holy Spirit, one God, now and for ever. Amen.

Posted by Fr. Christopher George Phillips at 9:54 AM