St. Francis and the Crèche 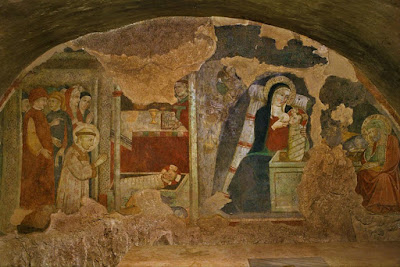 Chapel of the Crib at Greccio

It was in a grotto at Greccio, on Christmas Eve in 1223, that St. Francis created a crèche depicting the birth of our Savior. It was a simple affair, but as word spread throughout the area the people began to arrive with torches and candles. There they heard the Poor Man of Assisi read the Gospel telling of Christ's birth in Bethlehem, and he preached about Jesus taking poverty upon Himself, so that we might become rich in our love for God.

Since that time, the scene has been recreated in our homes and in our churches, in places public and private, allowing us to "go to Bethlehem, to see this great thing which has come to pass..."

This is the contemporary account written by St. Thomas of Celano, a follower of St. Francis:

Francis’ highest intention, his chief desire, his uppermost purpose was to observe the holy Gospel in all things and through all things and, with perfect vigilance, with all zeal, with all the longing of his mind and all the fervor of his heart, "to follow the teaching and the footsteps of our Lord Jesus Christ." He would recall Christ’s word through persistent meditation and bring to mind his deeds through the most penetrating consideration. The humility of the incarnation and the charity of the passion occupied his memory particularly, to the extent that he wanted to think of hardly anything else.

What he did on the birthday of our Lord Jesus Christ near the little town called Greccio in the third year before his glorious death should especially be noted and recalled with reverent memory. In that place there was a certain man by the name of John, of good reputation and an even better life, whom blessed Francis loved with a special love, for in the place where he lived he held a noble and honorable position in as much as he had trampled upon the nobility of his birth and pursued nobility of soul.

Blessed Francis sent for this man, as he often did, about fifteen days before the birth of the Lord, and he said to him: "If you want us to celebrate the present fast of our Lord at Greccio, go with haste and diligently prepare what I tell you. For I wish to do something that will recall to memory the little Child who was born in Bethlehem and set before our bodily eyes in some way the inconveniences of his infant needs, how he lay in a manger, how, with an ox and an ass standing by, he lay upon the hay where he had been placed.” When the good and faithful man heard these things, he ran with haste and prepared in that place all the things the saint had told him.

But the day of joy drew near, the time of great rejoicing came. The brothers were called from their various places. Men and women of that neighborhood prepared with glad hearts, according to their means, candles and torches to light up that night that has lighted up all the days and years with its gleaming star. At length the saint of God came, and finding all things prepared, he saw it and was glad. the manger was prepared, the hay had been brought, the ox and ass were led in. There simplicity was honored, poverty was exalted, humility was commended, and Greccio was made, as it were, a new Bethlehem. The night was lighted up like the day, and it delighted men and beasts. The people came and were filled with new joy over the new mystery. The woods rang with the voices of the crowd and the rocks made answer to their jubilation. The brothers sang, paying their debt of praise to the Lord, and the whole night resounded with their rejoicing. The saint of God stood before the manger, uttering sighs, overcome with love, and filled with a wonderful happiness. The solemnities of the Mass were celebrated over the manger and the priest experienced a new consolation.

The saint of God was clothed with the vestments of the deacon, for he was a deacon, and he sang the holy Gospel in a sonorous voice. And his voice was a strong voice, a sweet voice, a clear voice, a sonorous voice, inviting all to the highest rewards. Then he preached to the people standing about, and he spoke charming words concerning the nativity of the poor king and the little town of Bethlehem. Frequently too, when he wished to call Christ Jesus, he would call him simply the Child of Bethlehem, aglow with overflowing love for him; and speaking the word Bethlehem, his voice was more like the bleating of a sheep. His mouth was filled more with sweet affection than with words. Besides, when he spoke the name Child of Bethlehem or Jesus, his tongue licked his lips, as it were, relishing and savoring with pleased palate the sweetness of the word. The gifts of the Almighty were multiplied there, and a wonderful vision was seen by a certain virtuous man. For he saw a little child lying in the manger lifeless, and he saw the holy man of God go up to it and rouse the child as from a deep sleep. This vision was not unfitting, for the Child Jesus had been forgotten in the hearts of many; but, by the working of his grace, he was brought to life again through his servant St. Francis and stamped upon their fervent memory. At length the solemn night celebration was brought to a close, and each one returned to his home with holy joy.

The hay that had been placed in the manger was kept, so that the Lord might save the beasts of burden and other animals through it as he multiplied his holy mercy. And in truth it so happened that many animals throughout the surrounding region that had various illnesses were freed from their illnesses after eating of this hay. Indeed, even women laboring for a long time in a difficult birth, were delivered safely when some of this hay was placed upon them; and a large number of persons of both sexes of that place, suffering from various illnesses, obtained the health they sought. later, the place on which the manger had stood was made sacred by a temple of the Lord, and an altar was built in honour of the most blessed father Francis over the manger and a church was built, so that where once the animals had eaten the hay, there in the future men would eat unto health of soul and body the flesh of the Lamb without blemish and without spot, our Lord Jesus Christ, who in highest and ineffable love gave himself to us, who lives and reigns with the Father and the Holy Spirit, God, eternally glorious, forever and ever. Amen. Alleluia, Alleluia.

The most important section of the sanctuary at Greccio is the Chapel of the Crib, which was built in the present form in 1228. A rock under the altar indicates the place where Francis arranged the manger. The cave wall is surrounded by a fresco from the school of Giotto. It shows Francis wearing the dalmatic of a deacon and taking into his arms the infant Jesus.
Posted by Fr. Christopher George Phillips at 10:18 AM