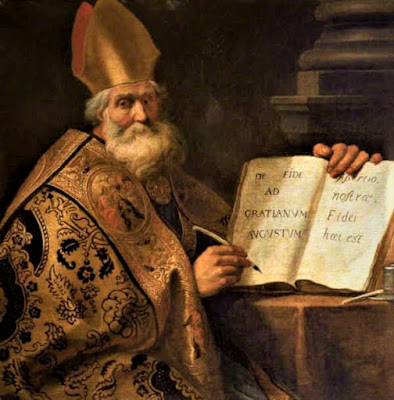 St. Ambrose was born about the year 339 in what is now France, the son of the Roman prefect of Gaul. Following his father's footsteps, Ambrose embarked upon a career in law and politics and by 370 AD, he had become the Imperial governor of Northern Italy, where the main city was Milan. In about 374 the bishop of Milan died. At this same time, the Arian heresy that argued against the divinity of Christ threatened to destroy the Church. The bishop, who wasn’t a very good one, had supported the Arians. So now, the question was, who would take his place - an Arian or a Catholic? Both sides met in the cathedral and a riot broke out.

Public order was Ambrose's responsibility as governor so he hurried to the church and made a passionate speech not in favor of either side, but in favor of peace. He begged the people to make their choice without fighting, using restraint and moderation.

Suddenly, while he was speaking, what sounded like a child’s voice called out, "Ambrose for bishop!" Soon everyone was shouting, "Ambrose for bishop!" The neighboring bishops and the Emperor convinced him to accept this call as the will of God, and so the catechumen Ambrose was baptized and ordained first deacon, then priest, then bishop, all in a single week!

This politician, now suddenly a bishop, was very much aware of his lack of preparation for this great responsibility and so set himself immediately to prayer and the study of Scripture. His deep spirituality and love of God's Word, put together with the speaking skill he had acquired in law and politics, made St. Ambrose one of the greatest preachers of the early church.

St. Ambrose proved to be a fierce opponent of heresy. He battled to preserve the independence of the Church from the state and courageously excommunicated the powerful Catholic Emperor Theodosius I, who had massacred a group of innocent people in Thessalonica. St. Ambrose also had a significant impact on sacred music through the composition of hymns and psalm tones that are known to this day as Ambrosian chant. Besides many sermons and treatises on the spiritual life, Saint Ambrose is responsible for two of the first great theological works written in Latin, De Sacramentis on the Sacraments and De Spiritu Sancto on the Holy Spirit.

Around 385, a young man who was a teacher of rhetoric named Augustine came to hear Saint Ambrose preach in order to study his speaking technique, and in the process, was attracted to the Catholic faith. In 386 Augustine was baptized by St. Ambrose and went on to become bishop of Hippo in North Africa. Ambrose and his pupil, Augustine, together with St. Jerome and St. Gregory the Great, make up the four original Doctors of the Latin Church. Saint Ambrose, the great bishop of Milan, died on Holy Saturday (April 4) in the year 397 AD. His feast day is December 7, the day he was ordained bishop.

O God, who didst give to thy servant St. Ambrose grace eloquently to proclaim thy righteousness in the great congregation, and fearlessly to bear reproach for the honour of thy Name: Mercifully grant to all bishops and pastors such excellency in preaching, and fidelity in ministering thy Word, that thy people may be partakers with them of the glory that shall be revealed; through Jesus Christ our Lord, who liveth and reigneth with thee and the Holy Spirit, one God, now and for ever. Amen.