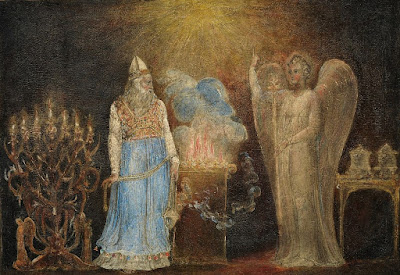 From the readings for Mass on December 19th:

And the angel of the LORD appeared to the woman and said to her, "Behold, you are barren and have no children; but you shall conceive and bear a son.” - Judges 13:3

But the angel said to him, "Do not be afraid, Zechariah, for your prayer is heard, and your wife Elizabeth will bear you a son, and you shall call his name John.” - St. Luke 1:13

Advent is a time to renew our hope and confidence in God’s faithfulness to the covenant He made with His people. In preparing the way for a Saviour, we see the wondrous miracle of two couples who didn’t think they would have children. But they did conceive and bear sons – Samson in the Old Testament and John the Baptist in the New Testament. These men were used by God to bring hope and deliverance at times of great difficulty in the history of God’s people.

Zechariah was from a priestly family and it was his privilege to be chosen to enter the inner court of the temple to offer sacrifice to God. While carrying out his duties he was visited by the archangel Gabriel, who told him that he and his wife Elizabeth would have a son. The people wondered why Zechariah was delayed and they were amazed that he was speechless when he returned from offering sacrifice. They rightly perceived that something special had transpired.

It was a great mystery for Zechariah to grasp all at once. Elizabeth, thought to be barren, would conceive, but both of them were beyond the age when they might expect to have a child. The Gospel tells us that Zechariah became speechless until the day his son was dedicated to the Lord and had been named John.

Silence allowed Zechariah to move more intensely into God’s presence, enabling him to be still and quiet so that he could hear God’s voice more clearly. Zechariah is a reminder to us of the importance of being silent before the Lord, to allow Him to speak to our hearts and reveal His mind to us.
________________________________________
Painting by William Blake, c. 1799
"The Angel appearing to Zacharias"
Posted by Fr. Christopher George Phillips at 9:40 AM