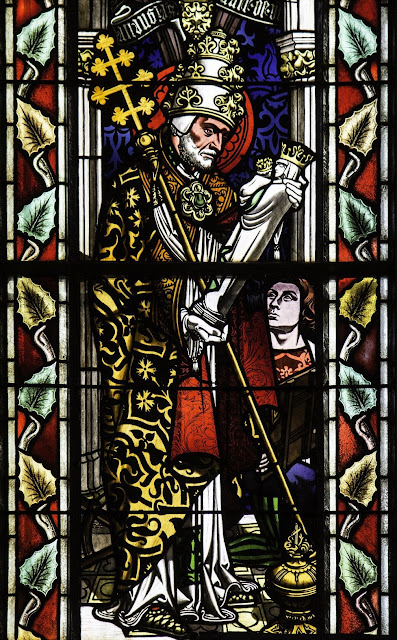 St. Sylvester was born in Rome and was ordained to the priesthood by Pope St. Marcellinus. This took place during a brief time of peace for the Church, immediately preceding the persecutions of Diocletian. Sylvester was one of the clergy who survived the cruelties during the reign of terror which ensued, and eventually saw the triumph of Constantine in the year 312. Two years later he succeeded St. Melchiades as Bishop of Rome.

The Council of Nicaea was assembled during Pope St. Sylvester's pontificate, in the year 325. By that time he was advanced in years, and so was not able to attend personally. He sent legates to the Council, and because they were the Pope's personal representatives, their names appear first among the signatories of the Decrees, preceding the Patriarchs of Alexandria and Antioch. St. Sylvester was Pope for twenty-four years and eleven months, and he died in the year 335.

Be merciful to the people of thy flock, O Lord, eternal Shepherd of our souls: and keep us in thy continual protection at the intercession of Saint Sylvester, whom thou didst raise up to be shepherd of the whole Church; through Jesus Christ thy Son our Lord, who liveth and reigneth with thee, in the unity of the Holy Spirit, ever one God, world without end. Amen.

Posted by Fr. Christopher George Phillips at 9:46 AM