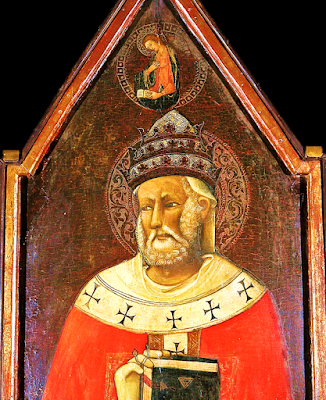 Pope St. Damasus is one the many popes whose name isn’t immediately recognizable to most people, but whose faithful service in the Chair of St. Peter is still reflected in the Church today. Damasus had served as a deacon under Pope Liberius, whose pontificate was filled with upheaval from both outside and inside the Church. In fact, when Pope Liberius died in the year 366, there were riots that broke out over the election of his successor. Most people favoured the deacon Damasus, a Roman who was of Spanish descent. Damasus was a very faithful man who upheld the fullness of the Catholic faith, and although there were some who supported another man whom they tried to install as pope, but Damasus finally was installed, with the Emperor Valentinian interceding to expel the anti-pope.

A time of peace in the Church came with Pope Damasus, and he was able to concentrate on the growth and strengthening of the Church. He knew the importance of the Holy Scriptures in the life of the Church, and one of his first projects was to gather together a list of the books of the Old and New Testaments, which until this time had been scattered piecemeal throughout the Church. He then asked his longtime friend and secretary, St. Jerome, to translate the Bible into Latin. St. Jerome’s Vulgate translation still serves as a foundation to the study and translation of the Scriptures to this very day.

Damasus had a great devotion to the martyrs who had gone before, and he searched out the tombs of the martyrs which had been blocked up and hidden in the catacombs during previous times of persecution, and he marked their tombs with beautiful slabs of marble. He lighted the passages of the catacombs, and encouraged the Faithful to make pilgrimages to the burial places of the martyrs. Damasus also beautified existing churches, on the principle that the worship of God demands our best, and that places of beauty can point us to heaven.

Throughout his pontificate, Pope Damasus was a strong defender of the orthodox Catholic faith, making it a point to publicly condemn various heresies which had crept into the Church, especially the heresy of Arianism. If fact, the place of Peter and his successors was never more respected as it was during the time of Pope Damasus, and he spent much of his energy in promoting the primacy of the Holy See, even leading the civil Roman government to recognize the special rights of the Church in society.

Pope St. Damasus was able to bring peace and strength to the Church, which had been so fractured under his predecessor, and this holy man died on December 11th in the year 384, after serving the Church as the Supreme Pontiff for eighteen years.

Grant, we pray thee, O Lord: that we may constantly exalt the merits of thy Martyrs, whom Pope Saint Damasus so venerated and loved; through Jesus Christ thy Son our Lord, who liveth and reigneth with thee, in the unity of the Holy Spirit, ever one God, world without end. Amen.

Posted by Fr. Christopher George Phillips at 9:31 AM