"He shall be called John." 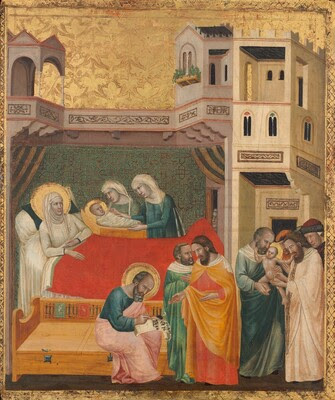 Now the time came for Elizabeth to be delivered, and she gave birth to a son. And her neighbors and kinsfolk heard that the Lord had shown great mercy to her, and they rejoiced with her. And on the eighth day they came to circumcise the child; and they would have named him Zechariah after his father, but his mother said, "Not so; he shall be called John." And they said to her, "None of your kindred is called by this name." And they made signs to his father, inquiring what he would have him called. And he asked for a writing tablet, and wrote, "His name is John." And they all marveled. And immediately his mouth was opened and his tongue loosed, and he spoke, blessing God. And fear came on all their neighbors. And all these things were talked about through all the hill country of Judea; and all who heard them laid them up in their hearts, saying, "What then will this child be?" For the hand of the Lord was with him.

In the Old Testament it is written in the Book of Malachi that when the Day of the Lord approached, the great prophet Elijah would return to announce the coming of the Messiah, who would be the Saviour and Ruler of all creation.

Elijah did indeed return, or it would be proper to say that one came who stood in Elijah’s place, fulfilling the role of the great prophet; that is, St. John the Baptist. His birth shows the love God has for His people, as everything was prepared meticulously for the coming of the Incarnate Word.

The Gospel appointed for December 23rd relates a very human situation. The relatives of Zechariah and Elizabeth have gathered on the eighth day after their son’s birth. It was the occasion on which the child would be named, but there was disagreement over what to name him.

In our own families, sometimes there are those who think a newborn child should be named after his paternal grandfather, or a child should be named such-and-such because “I’ve always loved that name.” In our ordinary family life we have opinions about such things. But the child in the Gospel today has already been named, and the name was made clear by the very angel who first brought the news. Both Zechariah and Elizabeth are firm about it: “He shall be called John.” It is an important name, and a name appropriate to the circumstances. It means "the Lord has been gracious."

With the birth of St. John the Baptist the way is paved for the outpouring of the grace and favour of God in the incarnation of our Lord Jesus Christ. Indeed, the Lord has been gracious, because the world which had been maimed by sin and death is now able to be a place of hope and new life for all mankind.
Posted by Fr. Christopher George Phillips at 11:22 AM