A highway for our God 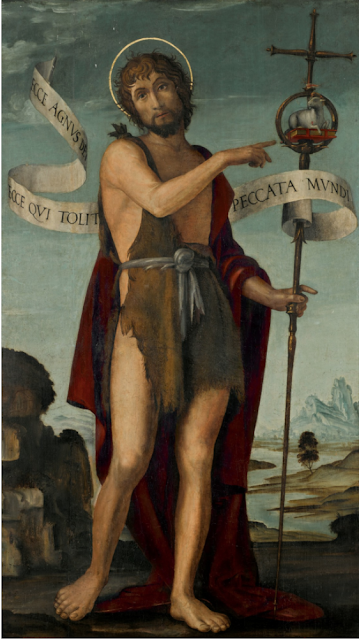 The beginning of the gospel of Jesus Christ the Son of God. As it is written in Isaiah the prophet, “Behold, I send my messenger before thy face who shall prepare thy way; the voice of one crying in the wilderness: Prepare the way of the Lord, make his paths straight –” John the baptizer appeared in the wilderness, preaching a baptism of repentance for the forgiveness of sins. And there went out to him all the country of Judea, and all the people of Jerusalem; and they were baptized by him in the river Jordan, confessing their sins. Now John was clothed with camel’s hair, and had a leather girdle around his waist, and ate locusts and wild honey. And he preached, saying “After me comes he who is mightier than I, the thong of whose sandals I am not worthy to stoop down and untie. I have baptized you with water; but he will baptize you with the Holy Spirit.”

St. John the Baptist was the builder of a highway. His birth had been prophesied for generations, that it would be a sign of the coming of the promised Messiah. The prophet Malachi had said, “Behold, I send My messenger, and he will prepare the way before Me. And the Lord whom you seek, will suddenly come to His temple.” Isaiah had spoken of the “voice of one crying in the wilderness: ‘Prepare the way of the Lord…’” St. John the Baptist was this Messenger, and his coming bore witness to the impending coming of Christ, making John the last of the Old Testament prophets, and the first of the New Testament prophets.

When John was born the people asked the question, “What kind of child will this be?” The people had their answer in the words spoken by his father, Zachariah: “And thou, child, shalt be called the prophet of the Most High; for thou shalt go before the face of the Lord to prepare His ways, to give knowledge of salvation to His people by the remission of their sins.” It would be John who would prepare the people to receive the Messiah and His mercy. John would, through his preaching, bring light to those who sit in darkness and the shadow of death.

Did those things actually happen? While we don’t read in the scriptures about mountains actually falling flat, or the floors of valleys being pushed up to the level of the mountains, those things did happen – just not in the plain, human, worldly sense that we might first think of. Rather, as John preached, those things happened in men’s hearts. Those who had hearts that were like mountains, puffed up with selfish pride – those who trusted in their own goodness – they were struck down by the crushing words of John’s proclamation. Those who were like valleys – those who lived in despair and who thought they could never achieve any righteousness – they were lifted up by the hope they found in John’s message. Hearts and minds which were crooked were made straight at John’s call to repentance. Lives which had been made rough with sin were smoothed out as they pressed towards John to let him wash them in the Jordan. It was through this message of repentance that the highway was built for Christ and for His Gospel. It was a highway for God Himself to come, where He would turn the dry, dead desert into a place of life.

It was to build this highway that John was born. It was for this reason that he went out to the desert. This is why he clothed himself in camel’s hair and ate locusts and wild honey. This is why he preached. It was all so that he could prepare the way of Christ.

And that’s exactly what he did. By his preaching of repentance, people were prepared for the One Who was to come. Of course, there were some who refused to listen then, just as there are those who won’t listen today. But for those who listened and believed, they were made ready to receive the Lamb of God who would take away their sins. And when the Lamb came, John pointed him out clearly. Those who repented and turned away from their life of sin and death found what they needed. They found forgiveness; they found life; they found salvation in Christ Jesus.

That’s the way it is with us today. The message of St. John the Baptist still sounds in our ears through the preaching of God’s Holy Catholic Church. John’s task of preparing us for Jesus continues. It’s no longer John, the son of Zechariah and Elizabeth who proclaims it; but we hear it through the Church’s faithful preaching and teaching of God’s Word. And this teaching calls us to stop our sinning and to turn our hearts away from ungodly things.

If we’ve built a mountain of spiritual pride, we’re called to stop being self-righteous, and we’re asked to humble ourselves before God. If we’ve been common or crude in our thoughts, or words, or deeds, God calls us away from these things, and we’re asked to put them behind us. If our hearts have become crooked, we’re called to turn away from dishonesty. If our lives are rough, the Church calls us to strive for the good and the beautiful and the godly.

This message doesn’t ask us to do something that’s beyond us. We’re not expected to remedy these things on our own. No, we’re asked to acknowledge our condition, and to repent, turning to God – and He’s the One who will give us the necessary grace and strength to do these things.

Through the Church’s continuation of the preaching of St. John the Baptist, a highway is laid down in the desert of our hearts. A path is made, so that the Lamb of God can come in and change the desert into a garden.

Stir up our hearts, O Lord, to prepare the ways of thine Only Begotten Son: that through his advent we may be worthy to serve thee with purified minds; through the same Jesus Christ thy Son our Lord, who liveth and reigneth with thee, in the unity of the Holy Spirit, ever one God, world without end. Amen.