The Holy Martyrs of Vietnam 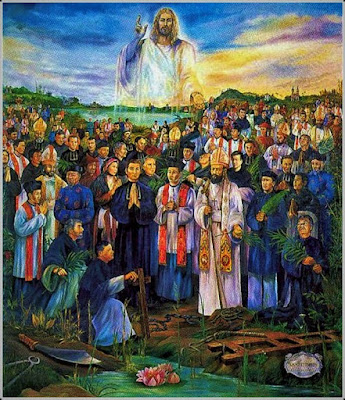 Saint Andrew Dung-Lac and the Holy Martyrs of Vietnam are 117 individuals who endured tremendous suffering and eventual death because of their Catholic Faith. They weren’t all martyred at the same time, but persecutions went on for nearly three hundred years. And there were far more than these 117 martyrs – there were some 100,000 people martyred for their faith, but their names are known only to God.
Christian missionaries first brought the Catholic faith to Vietnam during the 16th century. The traditional Vietnamese religion is Buddhism, mixed with elements of Taoism, Confucianism and the cult of ancestors. When Christianity came with missionaries early in the 16th century, it was seen as a foreign element and during those following three centuries the Faith became the object of persecution.

Over that time various emperors banned all foreign missionaries and ordered Vietnamese Christians to renounce Christianity by trampling on a crucifix. Churches were to be destroyed and teaching Christianity forbidden. Very many suffered death or extreme hardship.

Imprisoned bishops, hardly 30 years old, were mocked in prison, and were given a piece of bamboo as crozier and a paper mitre to wear – much like Jesus was mocked by the soldiers when he was arrested, and made to wear a crown of thorns. Older priests were put on display in cages to be publicly mocked, and simple poor peasants were murdered for refusing to trample on a crucifix. These tortures were barbaric and the persecutions have been compared with those of ancient Rome.

During the persecutions, Christians were marked on their faces with the words which meant “false religion,” husbands were separated from their wives, and children from their parents. Christian villages were destroyed and their possessions distributed. It wasn’t until 1862 that there was religious freedom, which marked the beginning of the end of the persecutions.

O God, by whose providence the blood of the martyrs is the seed of the Church: Grant that we who remember before thee St. Andrew Dung-Lac and his Companions, the Holy Martyrs of Vietnam, may, like them, be steadfast in our faith in Jesus Christ, to whom they gave obedience even unto death, and by their sacrifice brought forth a plentiful harvest; through Jesus Christ thy Son our Lord, who liveth and reigneth with thee and the Holy Spirit, one God, for ever and ever. Amen.

Posted by Fr. Christopher George Phillips at 9:51 AM