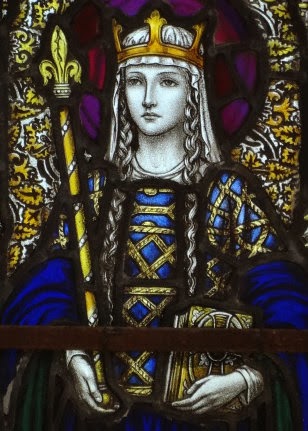 St. Margaret lived in the 11th century, and she was the great-niece of St. Edward the Confessor. She was a Saxon princess, but she was raised in Hungary in exile. Eventually, she and her parents returned to England, but she was forced flee once again after the Battle of Hastings. She went to the court of Malcolm, who was the King of Scotland.
Malcolm was an unrefined man, and Scotland was a wild place – but Margaret and Malcolm fell in love, and they were married. Margaret, in her gentle way and through her exemplary life, lived her Catholic faith in such a way that Malcolm and the people of Scotland gradually changed their ways to be more conformed to Christ’s teaching.

Margaret was a model mother and queen who brought up her eight children in an atmosphere of great devotion and she continued to work hard to improve the lives of the people of Scotland. She had a particular love for the poor, and provided for them out of her own resources, very often serving them herself.

O God, who didst call thy servant Margaret to an earthly throne that she might advance thy heavenly kingdom, and didst endue her with zeal for thy Church and charity towards thy people: mercifully grant that we who ask her prayers and commemorate her example may be fruitful in good works, and attain to the glorious fellowship of thy Saints; through Jesus Christ thy Son our Lord, who liveth and reigneth with thee, in the unity of the Holy Spirit, ever one God, world without end. Amen.

Posted by Fr. Christopher George Phillips at 10:35 AM