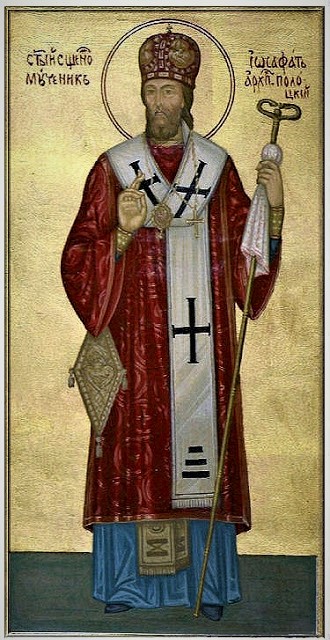 St. Josaphat was born about the year 1580 in what was the Polish province of Lithuania and was raised as an Eastern Rite Catholic. He had a deep devotion to the suffering of Christ, and looked at the schism between East and West as a wound in the Church as the Sacred Body of our Lord. As a young man in his mid-twenties he entered religious life, joining the Ukrainian Order of Saint Basil (known as the Basilians), and as a monk he gave himself over to penance and mortification, going barefoot even in winter, and eating only the poorest food.

In 1618, after living as a monk for nearly fifteen years, he was appointed to be archbishop of the Eastern Rite Diocese of Polotzk, and he devoted his energies to work for the reunion of the Church, all the while deepening the faith of his people through his preaching and his example. There were those in the Orthodox Church, not in union with Rome, who were very much against his work towards unity, and a group of them decided he must be stopped, making plans to assassinate him. In fact, St. Josaphat knew there were many who did not want unity, and he knew his life was in danger; however, he pressed forward in his work to heal the rift between East and West.

One day when he was visiting part of his diocese in territory which is now in Russia, his enemies made an attack on the place where he was staying, and many of those who were traveling with St. Josaphat were killed. Quietly and with humility, St. Josaphat went toward the attackers and asked them why they had done such a thing, saying to them, “If you have something against me, see, here I am.” The crowd screamed at him saying, “Kill the papist!” They ran towards him with their weapons, killing him with an axe-blow to his head.

St. Josaphat's body was thrown into the river, but it remained on the surface of the water, surrounded by rays of light, and was recovered. Those who had murdered him, when they were sentenced to death, repented of what they had done. Through the gentle example of St. Josaphat and helped by his heavenly intercession, through the grace of God they became Catholics.

Stir up in thy Church, we pray, O Lord, the Spirit that filled Saint Josaphat: that, as he laid down his life for the sheep; so through his intercession we, too, may be strengthened by the same Spirit and not fear to lay down our life for our brethren; through Jesus Christ thy Son our Lord, who liveth and reigneth with thee, in the unity of the Holy Spirit, ever one God, world without end. Amen.

Posted by Fr. Christopher George Phillips at 9:18 AM