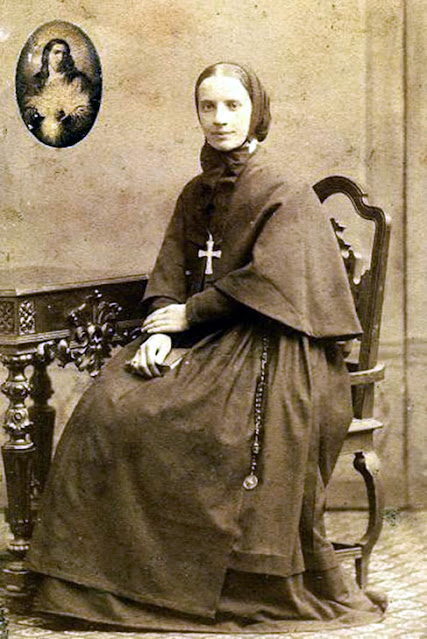 St. Frances Xavier Cabrini was the first American citizen to be canonized. She was a naturalized citizen, having been born in Italy in 1850. Her parents were simple farmers, accustomed to hard work and little money, but always ready to welcome another child. In fact, St. Frances was the thirteenth child, and her mother was fifty-two years old when she was born. It was a devout Catholic family in which she was raised, and at night after the day’s work was done, the children would listen to their father read them stories of the saints. Young Frances was especially fascinated by the saints who went on missions to foreign countries.

St. Frances had a great desire to help others, and after she finished school she assisted in the local parish by teaching catechism, and visiting the sick and the poor. She also taught school, and supervised the running of an orphanage, where she was assisted by a group of young women. Their work became so well-known that the bishop in a neighboring diocese heard of their work, and he asked Frances to establish a missionary institute to work in the area of education. Frances did as the bishop requested, and she called this new community the Missionary Sisters of the Sacred Heart. They opened an academy for girls, and before long the work spread with the establishment of new houses.

One day Frances was contacted by Bishop Scalabrini, an Italian bishop who had a great concern for the many immigrants who were leaving Italy for a new life in the United States. It was not easy for these immigrants, and upon their arrival in America they would endure tremendous hardships, and were not being given adequate spiritual care. As Bishop Scalabrini described the situation to Frances, she was very moved by what he said, but it did not occur to her that she might have a part in the solution. It was not until she had an audience with Pope Leo XIII about the future of her religious foundation that she changed her plans. It was her intention to receive papal permission to go to the missions of the orient, but the Holy Father had another suggestion. “Not to the East, but go to the West,” he said to her. “Go to America.”

Now known as Mother Cabrini, she had no hesitation when she heard the Pope’s words. To America she went, and she landed in New York in 1889, immediately establishing an orphanage, and then set about her life’s work – that of seeing a need, and then working for a solution. She built schools, places for child care, medical clinics, orphanages, and homes for abandoned babies. The poor had no place to go when they became seriously ill, so she built a number of hospitals for the needy. At the time of her death, there were more than five thousand children receiving care in the various institutions she built, and her religious community had grown to five hundred members in seventy houses throughout North and South America, France, Spain, and England.

St. Frances Xavier Cabrini was a frail woman, of a very small stature, but she amazed others with her energy and imagination. She was constantly traveling, sailing the Atlantic twenty-five times to visit her various religious houses and institutions. It was in 1909 that she adopted the United States as her country and formally became a citizen.

As she reached the end of her life, she had given thirty-seven years to the works of charity she loved so much. In her final illness she was admitted to a hospital in Chicago, Illinois. She died while making dolls to be given to orphans at an upcoming Christmas party, her last activity a simple act of charity. Mother Cabrini was beatified in 1938, and canonized in 1946 by Pope Pius XII.

God our Father, who didst call Saint Frances Xavier Cabrini from Italy to serve the immigrants of America: by her example, teach us to care for the stranger, the sick, and all those in need; and by her prayers help us to see Christ in all whom we meet; through the same Jesus Christ thy Son our Lord, who liveth and reigneth with thee, in the unity of the Holy Spirit, ever one God, world without end. Amen.

Posted by Fr. Christopher George Phillips at 11:28 AM