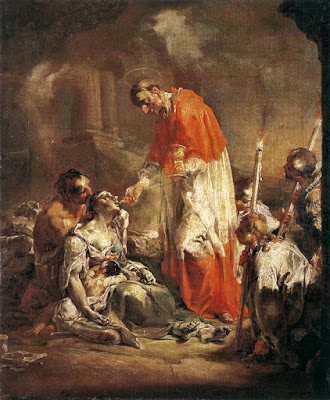 Charles Borromeo was born into an aristocratic, very wealthy Italian family. The family lived in a beautiful castle and lived lavishly, with an extravagant life of entertaining a court of noblemen. Charles was very good at athletics, music, art, and he enjoyed all the fine things that went along with the life of a rich and famous family. His mother was one of the Medici family, and one of his uncles was the pope. As was usual in those days, his uncle the pope made Charles a cardinal when he was only twenty-three and gave him many honours and titles. He was appointed papal legate to Bologna, the Low Countries, the cantons of Switzerland, and to the religious orders of St. Francis, the Carmelites, the Knights of Malta, and others.
When Charles’ father died, everyone thought that Charles would give up his ecclesiastical positions, and that he would marry some young noblewoman, and become the head of the Borromeo family. But Charles didn’t do that. Instead, he discerned a vocation to ordination, and he became a priest. Not long after, he was appointed bishop of Milan, a city that had not had a resident bishop for over eighty years.

He once ordered an atonement procession and led it with a rope about his neck, with bare and bloody feet, a cross upon his shoulder, thus presenting himself as an expiatory sacrifice for his people to ward off divine punishment. He died in 1584 at the age of forty-six, dressed in sackcloth and ashes, holding a picture of Jesus Crucified in his hands. His last words were, "See, Lord, I am coming, I am coming soon."

Posted by Fr. Christopher George Phillips at 10:33 AM