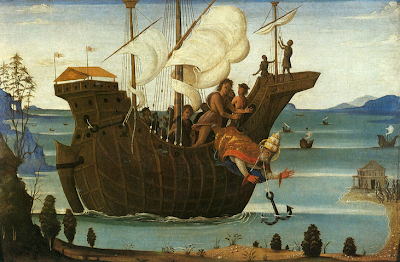 St. Clement I of Rome (92-101) was one of the first popes. According to St. Ireneus, he was the third after Peter, following Pope Linus and Pope Cletus. Clement died as a martyr, but otherwise we know little about his life. He may be the one Paul mentions as his companion in Phil. 4:3. St. Clement wrote a letter to the Corinthians, and we have the text of that, in which he intervenes as the Pope to that community, which had a number of troubles going on – showing us very early the place of the successor of St. Peter in the Church.
Because of his zeal for souls, Pope Clement was banished from Rome to a distant place, where he found two-thousand Christians who had also been banished. When he came to these exiles he comforted them. "They all cried with one voice: Pray for us, blessed Clement, that we may become worthy of the promises of Christ. He replied: Without any merit of my own, the Lord sent me to you to share in your crowns." When they complained because they had to carry the water six miles, he encouraged them, "Let us all pray to the Lord Jesus Christ that He may open to His witnesses a fountain of water." "While blessed Clement was praying, the Lamb of God appeared to him; and at His feet a bubbling fountain of fresh water was flowing." Seeing the miracle, "All the pagans of the neighborhood began to believe."

When the Emperor Trajan heard of these marvels, he ordered Clement to be drowned with an iron anchor around his neck. "While he was making his way to the sea, the people cried with a loud voice: Lord Jesus Christ, save him! But Clement prayed in tears: Father, receive my spirit." At the shore the Christians asked God to give them the body. The sea receded for three miles and there they found the body of the saint in a stone coffin within a small marble chapel; alongside lay the anchor. The body was taken to Rome by Sts. Cyril and Methodius and placed in a church dedicated to his honor (S. Clemente). This is one of the most venerable of the churches in Rome because it retains all the liturgical arrangements of ancient times.

O Everlasting Shepherd, favourably look upon thy flock: and keep it with perpetual protection, through the intercession of blessed Clement thy Pope and Martyr, whom thou didst appoint to be shepherd of the whole Church; through Jesus Christ thy Son our Lord, who liveth and reigneth with thee, in the unity of the Holy Spirit, ever one God, world without end. Amen.