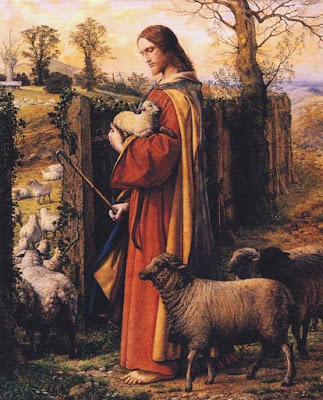 Our Lord told a parable: “What man of you, having a hundred sheep, if he has lost one of them, does not leave the ninety-nine in the wilderness, and go after the one which is lost, until he finds it? And when he has found it, he lays it on his shoulders, rejoicing. And when he comes home, he calls together his friends and his neighbors, saying to them, `Rejoice with me, for I have found my sheep which was lost.’ Just so, I tell you, there will be more joy in heaven over one sinner who repents than over ninety-nine righteous persons who need no repentance.”

When Jesus told this parable He was reflecting a picture already familiar to the Jews. The prophet Ezekiel (34:11, 12) had spoken about God searching out His sheep, rescuing them from the places in which they were lost:

“For thus says the Lord God: Behold, I, I myself will search for my sheep, and will seek them out. As a shepherd seeks out his flock when some of his sheep have been scattered abroad, so will I seek out my sheep; and I will rescue them from all places where they have been scattered…”


Why had the sheep been scattered? It was because they had false shepherds over them, shepherds concerned mostly for themselves and their own comfort. Just before assuring Israel that He, the Lord God, would care for His sheep, He had said this:


Our Lord Jesus Christ, in His own Person, shows us the kind of shepherds He wants to have over us. Jesus our Shepherd is concerned about each one of us. Each one of us is precious to Him. He tends those who are wounded. He heals the sick. He searches out those who are lost. He even watches over those who are strong.

Jesus our Shepherd has an overwhelming love for each one of His sheep. Our shepherd is neither dictatorial nor is He weak; rather, He is a shepherd whom we want to follow, because He is a shepherd who comforts us, warding off danger and leading us on to safety. His sheep do not fear Him; rather, they return love for love, and they are obedient because they have seen His own obedience.

Oh, to have shepherds after Christ’s own Heart!
Posted by Fr. Christopher George Phillips at 9:54 AM