The Transitus of St. Francis 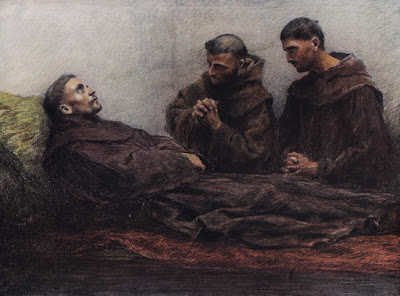 The Transitus of St. Francis is traditionally celebrated by Franciscans all over the world on October 3rd. This is the vigil of the Feast of St. Francis and is a night to commemorate the death of the beloved Saint.
“Transitus” is a Latin word meaning “passage” or “crossing over.” In every account written of the death of St. Francis, it is remembered that he crossed over from life on earth to eternal life with the Lord, full of great joy and song.

This is a brief account of his final hours:

“On the eve of his death, the saint, in imitation of his Divine Master, had bread brought to him and broken. This he distributed among those present, asking God’s blessing upon Bernard of Quintaville, his first companion, and Elias, his vicar, as well as all the others in order. “I have done my part,” he said next, “may Christ teach you to do yours.” Then wishing to give a last token of detachment and to show he no longer had anything in common with the world, Francis removed his poor habit and lay down on the bare ground, covered with a borrowed cloth, rejoicing that he was able to keep faith with his Lady Poverty to the end. After a while he asked to have read to him the Passion according to St. John, and then in faltering tones he himself intoned Psalm cxli. At the concluding verse, ‘Bring my soul out of prison’, Francis was led away from earth by ‘Sister Death’, in whose praise he had shortly before added a new strophe to his ‘Canticle of the Sun’.”