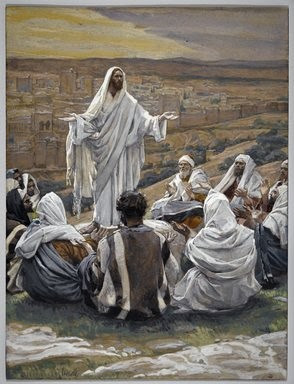 "Pray then like this: Our Father..."
Jesus gave His disciples the perfect prayer which addresses God as "Our Father." It’s probably the most familiar prayer in history, and yet its familiarity means that sometimes we don’t think about the words as much as we should when we say it. Even the first word is important, as it is in our English translation – “Our.” When Jesus taught this prayer, he set it very much in the context of “all of us together.”

Certainly, God loves each one of us individually, and He deals with us individually, but He has called us individually to be part of His Body, the Church. Throughout the whole prayer, it’s prayed in the plural – and it’s a reminder to us that we are part of something much larger than ourselves, and that what we do or neglect to do has an effect on others.

When we were baptized, that sacrament affected us individually, certainly – it took away the stain of original sin – but it also incorporated us into something; namely, the Church, the Body of Christ.

When we were confirmed, each of us was sealed with the gift of the Holy Spirit. But it also made us active members of an army – the army of Christ - and we were given grace and power to join with others in fighting against sin, the world and the devil.

Even when we pray to God by ourselves, when we say the Amen, we say it with the whole Church – Militant, Expectant, and Triumphant.