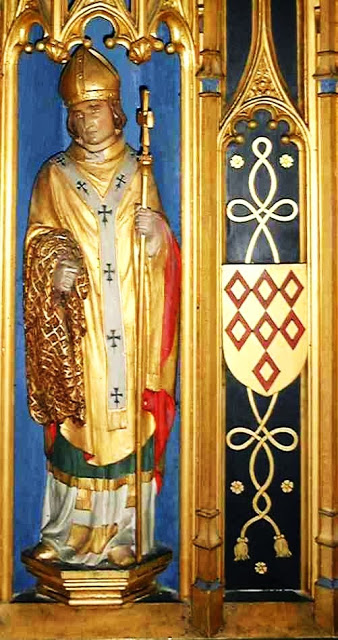 St. Wilfrid was born in Northumberland in 634. We know something of his life from the writings of the Venerable Bede in the early eighth century. Wilfrid was born into a wealthy Christian family. His mother died when he was thirteen and he was sent to Lindisfarne to be educated under the Celtic St Aidan. Queen Enflaed of Northumbria was his patron. So, the young Wilfrid had a very good education, impressive connections and, having chosen a religious career, he was sent off to Rome to continue his education. He returned to England in 658 and settled with the Benedictine monks in Ripon Abbey.

It wasn’t long before Wilfrid was caught up in a power struggle in the church between those who favoured the new Roman practices and ideas brought by Augustine rather than some of the older Celtic traditions. There was something of a north-south divide, with the Roman practice centred at Canterbury and the Celtic tradition in the north. There were great arguments about the timing of Easter and whether monks should shave a tonsure, for example. Wilfrid was instrumental in a victory for the Roman view at the Conference of Whitby in 664. Shortly afterwards, he was appointed Bishop of York.

In the following years Wilfrid built magnificent stone churches at Hexham, Ripon and York. However, he was soon at the centre of conflict again, having fallen out with Theodore, Archbishop of Canterbury, over plans to divide York diocese into two. Wilfrid had to leave York for a while between the years 681 and 686 and it was during this time that he came to the Meon Valley to evangelise the Jutes and Saxons who had recently settled in the area. Wilfrid lived at an extraordinary time for the church. He encountered great controversy, accumulated huge landholdings, befriended kings and rulers across Europe and travelled to Rome three times on horseback and on foot. He suffered shipwreck and was nearly murdered several times – once by natives off the coast of Sussex. He had been a bishop for forty-five years and a pillar of the church during one of the most turbulent periods of its history as it sought to establish itself in a pagan land. Wilfrid died on 12th October 709 at the Minster church of St Andrew’s, Oundle.

St. Wilfrid is often shown holding fishing nets. According to St. Bede, the men of South West Sussex and the Meon Valley were “ignorant of the name and faith of God”. Just before Wilfrid’s arrival there had been the most terrible famine and the distress was so acute that often "forty or fifty, being spent with want, would go together to some cliff, or to the seashore, and there, hand-in-hand, miserably perish by the fall or be swallowed by the waves."

Although there were fish enough to eat in the rivers and sea, the poor country folk did not know how to catch them and could only fish for eels. Wilfrid borrowed these nets and, casting them into the sea, "by the blessing of God immediately took three hundred fishes of different kinds, which they divided into three parts, giving a hundred to the poor, a hundred to those who had lent them the nets and keeping a hundred for their own use. By this act of kindness the Bishop gained the affections of them all and they began more readily, at his preaching, to hope for heavenly goods; seeing that, by his help, they had received those which are temporal."

And so, Wilfrid followed the teaching of Christ himself, as he first fed the people of the Meon Valley and then went on to tell them all about God’s love and grace.

Almighty God, who didst call our forebears to the light of the Gospel by the preaching of thy servant Wilfrid: grant us, who keep his life and labour in remembrance, to glorify thy Name by following the example of his zeal and perseverance; through Jesus Christ thy Son our Lord, who liveth and reigneth with thee, in the unity of the Holy Spirit, ever one God, world without end. Amen.