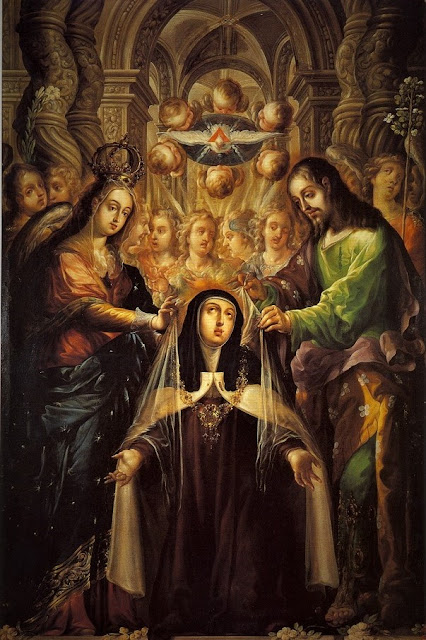 St. Teresa was born in 1515, and she lived at an exciting time in history. Columbus had sailed to the new world only about twenty years before. Things were happening in the Church, and during her life, Martin Luther started the movement of protestants out of the Church.  In the midst of all this change and turmoil, Teresa developed her great spirituality which leads to God’s peace.
Teresa's father was honest and pious, but very strict. Teresa's mother loved romance novels but because her husband objected to what he considered to be trashy books, so she hid the books from him. This put Teresa in the middle -- especially since she liked the romances too. Her father told her never to lie but her mother told her not to tell her father. Later she said she was always afraid that no matter what she did she was going to do everything wrong. When she was five years old she convinced her older brother that they should, as she later wrote, "go off to the land of the Moors and beg them, out of love of God, to cut off our heads there." They got as far as the road from the city before an uncle found them and brought them back. After this incident she led a fairly ordinary life, though she was convinced that she was a horrible sinner. As a teenager, she cared only about boys and clothes and flirting and rebelling -- like other teenagers throughout the ages. When she was 16, her father decided she was out of control and sent her to a convent. At first she hated it but eventually she began to enjoy it -- partly because of her growing love for God, and partly because the convent was a lot less strict than her father.

Still, when the time came for her to choose between marriage and religious life, she had a tough time making the decision. She'd watched a difficult marriage ruin her mother. On the other hand being a nun didn't seem like much fun. When she finally chose religious life, she did so because she thought that it was the only safe place for someone as prone to sin as she was.

Once installed at the Carmelite convent permanently, she started to learn and practice mental prayer. Teresa prayed this way off and on for eighteen years without feeling that she was getting results. Part of the reason for her trouble was that the convent wasn’t really as it should have been. Many women who had no place else to go wound up at the convent, whether they had vocations or not. They were encouraged to stay away from the convents for long period of time to cut down on expenses. Nuns would arrange their veils attractively and wear jewelry. Prestige depended not on piety but on money. There was a steady stream of visitors in the parlor and parties that included young men. Everyone liked Teresa and she liked to be liked. She found it too easy to slip into a worldly life and ignore God. For years she hardly prayed at all because she thought it showed humility. She thought as a wicked sinner she didn't deserve to get favors from God.

When she was 41, a priest convinced her to go back to her prayer, but she still found it difficult. As she started to pray again, God gave her an increasingly deep spirituality.

At the age of 43, she became determined to found a new convent that went back to the basics of a contemplative order: a simple life of poverty devoted to prayer. There was great resistance to this – everybody liked things the way they’d been. But she was determined, and going against all the resistance, she persevered. She died on October 4 at the age of 67, having brought about the Order of Discalced Carmelites. In 1970 she was declared a Doctor of the Church for her writing and teaching on prayer.

Merciful God, who by thy Spirit didst raise up thy servant Saint Teresa of Jesus to reveal to thy Church the way of perfection: grant that her teaching may awaken in us a longing for holiness until, assisted by her intercession, we attain to the perfect union of love in Jesus Christ thy Son our Lord; who liveth and reigneth with thee, in the unity of the Holy Spirit, ever one God, world without end. Amen.

Posted by Fr. Christopher George Phillips at 11:03 AM