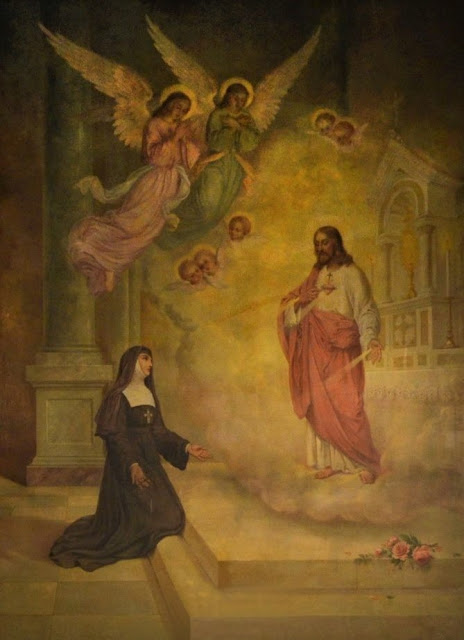 St. Margaret Mary was born on July 22, 1647 in Burgundy, France, and was the fifth child of seven in her family. When she was eight years old, her father died suddenly, and her mother had to be away from home quite often, so Margaret Mary went away to attend school and came under the care of nuns. At the age of nine, she received her first Holy Communion. Right after that she wrote, "This Communion made all the small pleasures and amusements so repellent to me, that I could no longer take pleasure in any . . . just when I wanted to begin some game with my companions, I would always feel something drawing me, calling me to some quiet corner, giving me no peace till I had followed and then setting me to pray.” It was at that time that she became seriously ill, and she was bedridden with paralysis. For four years she suffered, but she prayed to the Blessed Virgin Mary for healing. The time stretched on, and she continued to pray, finding more and more comfort in receiving and adoring the Blessed Sacrament, as Christ made His presence known to her. At the age of fifteen, she was cured and was no longer bedridden.
Back at home with her family, Margaret Mary continued to grow in her spiritual life, and she experienced private visions of Christ, with an increasing sense of His overwhelming love. During this time her mother had been urging her to marry, but there was a developing vocation to religious life stirring within her.

In 1671, at the age of twenty-three, Margaret Mary entered the Convent of the Visitation Nuns, and it was there just two years later, when she was kneeling before the Blessed Sacrament, that she experienced a vision in which the Lord told her that He had a particular work for her to do. She later described what she saw in the vision, how our Lord’s Heart appeared to be on fire and surrounded by a crown of thorns. Our Lord told her that the flames represented His love for humanity, and the thorns represented man’s sinfulness and ingratitude. Jesus revealed to her that her mission was to establish the devotion to His Most Sacred Heart.

Over the next year and a half, she had three more visions. In those visions, Jesus explained to her the spiritual exercises that have become part of devotion to Christ’s Sacred Heart. St. Margaret Mary informed her Mother Superior about the visions, who did not know what to think about them. St. Margaret Mary was examined by priests and other experts, who tried to convince her that these experiences were illusions.

All of this led to another time of serious sickness, but her Superior promised that if Margaret Mary were healed, she herself would believe the visions were real. So Margaret Mary prayed and was healed, and her Mother Superior believed her. However, many others did not. Nonetheless, she received some encouragement from a priest who served as her spiritual director, and St. Margaret Mary was given the confidence she needed to encourage others to see in the Sacred Heart of Jesus the great symbol of His love for mankind. The devotion began to spread, first among the nuns in her community, and gradually it was accepted throughout the world.

On October 17, 1690, St. Margaret Mary was approaching death. As she received the last rites of the Church, her final words were, “I need nothing but God, and to lose myself in the heart of Jesus.”

O Lord Jesus Christ, who unto thy holy Virgin Margaret Mary Alacoque didst reveal the unsearchable riches of thy Sacred Heart: grant us, by her merits and example, to love thee in all things and above all things, and so find in thy loving Heart an everlasting habitation; who livest and reignest with the Father in the unity of the Holy Spirit, ever one God, world without end. Amen.

Posted by Fr. Christopher George Phillips at 10:31 AM