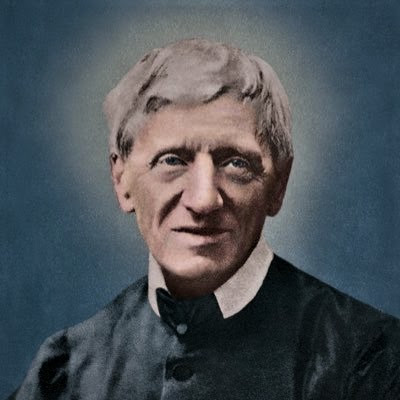 John Henry Newman, the 19th century's most important English-speaking Roman Catholic theologian, spent the first half of his life as an Anglican and the second half as a Roman Catholic. He was a priest, popular preacher, writer and eminent theologian in both Churches.
Born in London, England, he studied at Oxford's Trinity College, was a tutor at Oriel College and for 17 years was the Anglican vicar of the university church, St. Mary the Virgin.

After 1833, Newman was a prominent member of the Oxford Movement, which emphasized the links which the Church today must have with the Church at the beginning.

His study and research eventually convinced John Henry Newman that the Roman Catholic Church was indeed in continuity with the Church that Jesus established. He stopped his work in Oxford and retired to Littlemore. It was there, on October 9, 1845, he was received into full communion as a Catholic. Two years later he was ordained a Catholic priest in Rome and joined the Congregation of the Oratory, founded three centuries earlier by St. Philip Neri. Returning to England, Newman founded Oratory houses in Birmingham and London and for seven years served as rector of the Catholic University of Ireland.

Newman eventually wrote 40 books and 21,000 letters that survive. Most famous are his book-length Essay on the Development of Christian Doctrine, On Consulting the Faithful in Matters of Doctrine, Apologia Pro Vita Sua (his spiritual autobiography up to 1864) and Essay on the Grammar of Assent.

When Newman was named a cardinal in 1879, he took as his motto "Cor ad cor loquitur" (Heart speaks to heart). He was buried in Rednal (near Birmingham) 11 years later. After his grave was exhumed in 2008, a new tomb was prepared at the Oratory church in Birmingham. but it was found that his remains had returned to the earth completely.

Three years after Newman died, a Newman Club for Catholic students began at the University of Pittsburgh. In time, his name was linked to ministry centers at many public and private colleges and universities in the United States.

Pope Benedict XVI beatified Newman on September 19, 2010, at Crofton Park (near Birmingham). The pope noted Newman's emphasis on the vital place of revealed religion in civilized society but also praised his pastoral zeal for the sick, the poor, the bereaved and those in prison.  His canonization took place on October 13, 2019.
From his writings:

"God has created me to do Him some definite service. He has committed some work to me which He has not committed to another. I have my mission. I may never know it in this life, but I shall be told it in the next. I am a link in a chain, a bond of connection between persons. He has not created me for naught. I shall do good; I shall do His work. I shall be an angel of peace, a preacher of truth in my own place, while not intending it if I do but keep His commandments. Therefore, I will trust Him, whatever I am, I can never be thrown away. If I am in sickness, my sickness may serve Him, in perplexity, my perplexity may serve Him. If I am in sorrow, my sorrow may serve Him. He does nothing in vain. He knows what He is about. He may take away my friends. He may throw me among strangers. He may make me feel desolate, make my spirits sink, hide my future from me. Still, He knows what He is about."

O God, who didst bestow upon thy Priest Saint John Henry Newman, the grace to follow thy kindly light and find peace in thy Church: graciously grant that, through his intercession and example, we may be led out of shadows and images into the fulness of thy truth; through Jesus Christ thy Son our Lord, who liveth and reigneth with thee, in the unity of the Holy Spirit, ever one God, world without end. Amen.