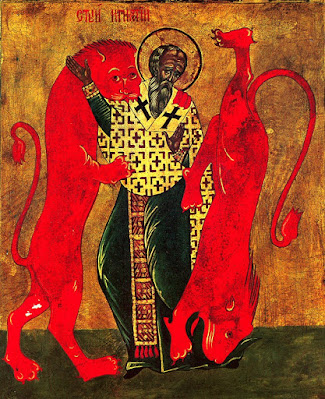 St. Ignatius was the second Bishop of Antioch, and had been a disciple of the Apostle St. John. There is a tradition which says that he was the young child whom Christ put in the midst of his disciples and said, “Unless you become as this little child, you cannot inherit the Kingdom of God.” Ignatius was consecrated bishop about the year 69 by the Apostle Peter. He was a holy man who was deeply loved by the Christian faithful, he always made it his special care to defend “orthodoxy” (right teaching) and “orthopraxy” (right practice) among the early Christians.
In 107, during the reign of the brutal Emperor Trajan, St. Ignatius was sentenced to death because he refused to renounce the Christian faith. He was taken under guard to Rome where he was to be publicly executed by being devoured by wild beasts. During his journey from Antioch to Rome, he was taken through Asia Minor and Greece. As he traveled he wrote seven letters to encourage, instruct, and inspire the Christians in the communities along the way, and the texts of these letters survive to this day. They outline the orthodox Christian faith, and in them we find the term “catholic” being used to describe the whole Church. These letters connect us to the early Church and to the unbroken, clear teaching of the Apostles which was given to them directly by Jesus Christ.

St. Ignatius was not afraid of death, because he knew it had been defeated by Christ. He wrote to the disciples in Rome: "Permit me to imitate my suffering God ... I am God's wheat and I shall be ground by the teeth of beasts, that I may become the pure bread of Christ.”

Feed us, O Lord, with the living Bread and make us drink deep of the cup of salvation: that, following the teaching of thy Bishop Ignatius, and rejoicing in the faith with which he embraced the death of a Martyr, we may be nourished for that eternal life which he ever desired; through Jesus Christ thy Son our Lord, who liveth and reigneth with thee, in the unity of the Holy Spirit, ever one God, world without end. Amen.

Posted by Fr. Christopher George Phillips at 9:33 AM